Sanilac County is a county located in the U.S. state of Michigan. As of the 2010 census, the population was 43,114. The county seat is Sandusky. The county, which is part of the Thumb region, was created on September 10, 1822, and was fully organized in 1848. 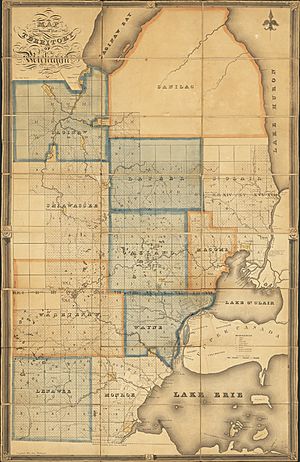 Map of the Surveyed Part of the Territory of Michigan by Orange Risdon, 1825, showing an earlier, larger incarnation of Sanilac County, most of which had not yet been surveyed.

Sanilac County was probably named for a Wyandot (Huron) chief named Sanilac. (See List of Michigan county name etymologies). The county was formed on September 10, 1822, by Michigan Territory from part of St. Clair County and unorganized territory administered by Oakland County. It lost land to the creation of Huron and Tuscola counties in 1840. The county government was fully organized on December 31, 1849.

In the middle of the 19th century, the area now called Port Sanilac was called Bark Shanty. It was named for a lone shanty made of bark, which was used to make shingles from pine. The Algonquin word "zngwak" means pine. The county seat of Sanilac is the city of Sandusky. 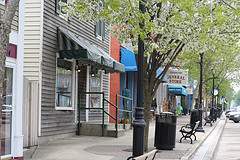 Downtown Lexington, Michigan in the Thumb.

All content from Kiddle encyclopedia articles (including the article images and facts) can be freely used under Attribution-ShareAlike license, unless stated otherwise. Cite this article:
Sanilac County, Michigan Facts for Kids. Kiddle Encyclopedia.