One of the locks which were used to control water on Romney Marsh. 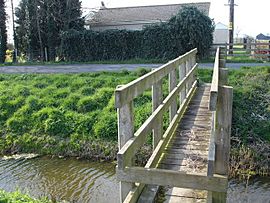 Sheep proof footbridge: this is one of many footbridges that cross the dykes on Romney Marsh.

Romney Marsh is a coastal marshland of southern England. It runs from Hythe in Kent to Rye in East Sussex. It covers about 100 miles2 (260 km2). Romney Marsh is one of three English wetlands, the others being The Fens of East Anglia and the Somerset Levels.

Much of the area has been reclaimed over the centuries, and is now flat farmland. Before the area was drained, it was a cause of malaria among the inhabitants. For much of its history, the Marsh was fringed by a lagoon, which was protected by a shingle beach at Dymchurch.

The Marsh still contains some water features, particularly the Royal Military Canal, completed in 1809, and the River Rother.

At Romney Marsh the coast is at its closest to France, and was several times the point of invasion. In AD 892, a Danish fleet of 250 ships sailed right into the River Rother and took the fortress at Appledore (allegedly built by King Arthur), which they destroyed.

The Romans used the Romney area for a salt industry. Pans of brackish water were left to evaporate, and the salt collected for use in food.

The marsh includes two of the ancient Cinque Ports, New Romney and Hythe, and two ancient towns, Rye and Winchelsea. New Romney was once a port, but is now a mile and a half from the sea. It is the main centre of population on the Marsh.

All content from Kiddle encyclopedia articles (including the article images and facts) can be freely used under Attribution-ShareAlike license, unless stated otherwise. Cite this article:
Romney Marsh Facts for Kids. Kiddle Encyclopedia.