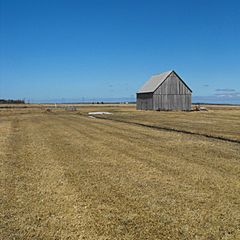 A hay barn of a type once numerous on the Tantramar Marsh.

The Tantramar Marshes also known as the Tintamarre National Wildlife Area is a tidal saltmarsh around the Bay of Fundy on the Isthmus of Chignecto. The area borders between Route 940, Route 16 and Route 2 near Sackville, New Brunswick.

At 20,230 hectares, the marsh is one of the largest on the Atlantic coast of North America. The marshes are an important stopover for migrating waterfowl such as semi-palmated sandpipers and Canada geese. Now a National Wildlife Area the marshes are the site of two bird sanctuaries.

The name Tantramar is derived from the Acadian French tintamarre, meaning 'din' or 'racket', a reference to the noisy flocks of birds which feed there.

Communities on or bordering the marshes include, in New Brunswick: Aulac and Sackville, and on the Nova Scotia side: Amherst, and Fort Lawrence.

The marshes are a broad expanses of flat land just above mean sea level. The soil consists of silts deposited by centuries of tidal flooding. Drainage is poor and there are slow-moving meandering rivers, shallow lakes and bogs, which favours the growth of sedges and tamarack. The marsh's intertidal zones provide a habitat for many species of freshwater and estuarine life. It is drained by the Aulac, LaPlanche, Missaguash, and Tantramar Rivers.

History and economy of the marshes 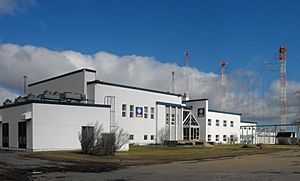 The now-decommissioned RCI transmitter station in 2009.

For a full account of human activity on the marshes, see the History of Sackville.

Before the arrival of Europeans, well-traveled portage routes connected the Bay of Fundy with the Northumberland Strait. Migrating from Port Royal in around 1671, Acadians established a village in the area (which they called Beaubassin). They founded a number of scattered settlements on higher ground, and created the dykes and sluices which converted the salt marshes to fields and pastures. Following the Battle of Fort Beauséjour which marked the end of the battle for Acadia between the British and French, it was the site of the beginning of the expulsion of the Acadians in 1755. Six years later the British resettled the area, and continued to convert the marsh to arable land.

As time went on, land ownership became consolidated and a Commission of Sewers was established, which was crucial to the economy. By the mid-1800s, 10,000 hectares was producing grains, root crops, and marsh hay. Once the land was drained, the cost of producing hay was low, Tantramar hay was sold to lumber camps, exploration, and mining in Atlantic Canada and stables as far away as Boston. In the 1930s there were more than 400 post-and-beam hay barns on the marshes, for hay storage. Today there are fewer than 30. The price of hay was $28 per ton in 1920, but as horses were replaced by cars and as manufacturing moved west, the hay price fell to $7 a ton in 1938. The marshes then became pasture, and as their agricultural profitability declined the Canadian Wildlife Service and Ducks Unlimited helped to return the marshes to a more natural state. After 2010 fears emerged that rising sea levels (and deterioration of 18th-century hand-built dikes) threatened to flood the Tantramar Marshes and make Nova Scotia into an island separate from the North American mainland.

In 1945 Radio Canada International opened a radio transmitter and the site proved to be one of the best shortwave transmitting locations in the world. Shortwave broadcasting ended in 2012 and transmitting towers have since been removed. In 2017, the CBC announced that the site had been sold to a non-profit consortium of New Brunswick Mi'kmaq bands known as Mi'gmawe'l Tplu'taqnn. The intended use of the property was not disclosed.

All content from Kiddle encyclopedia articles (including the article images and facts) can be freely used under Attribution-ShareAlike license, unless stated otherwise. Cite this article:
Tantramar Marshes Facts for Kids. Kiddle Encyclopedia.