Ducks Unlimited (DU) is an American nonprofit organization 501(c) dedicated to the conservation of wetlands and associated upland habitats for waterfowl, other wildlife, and people. It has had a membership of around 700,000 since January 2013.

In 1927, an offshoot of the Boone and Crockett Club was created specifically for sport bird management and operated until 1930 as the American Wild Fowlers. Membership included such people as Arthur Bartley and Nash Buckingham, who would later be involved in the conservation movement. In 1930, Joseph P. Knapp, a publishing tycoon who successfully obtained such notable publications as The Associated Sunday Magazine, Crowell Publishing Company, Collier’s Weekly, Farm and Fireside, and the book publisher P.F. Collier & Sons, founded More Game Birds in America and American Wild Fowlers was quickly absorbed into the new organization.

In 1937, Knapp, Robert Winthrop, and a small group of conservation philanthropists decided to focus on the decreasing waterfowl populations, and the habitat necessary to sustain them in Canada. Ducks Unlimited was incorporated on January 29, 1937. More Game Birds in America was then absorbed by the new waterfowl organization. Ducks Unlimited Canada was incorporated in Winnipeg, Manitoba, on March 10, 1937.

Ducks Unlimited has conserved at least 12.5 million acres of waterfowl habitat in North America. DU partners with a wide range of corporations, governments, other non-governmental organizations, landowners, and private citizens to restore and manage areas that have been degraded and to prevent further degradation of existing wetlands. DU is also active in working with others to recommend government policies that will influence wetlands and the environment. DU generated more than $235 million in revenues during their 2012 fiscal year; a minimum of 80 percent of that revenue goes directly toward habitat conservation. Their sources of revenue include federal and state habitat reimbursements, conservation easements, sponsors, members, major gifts, donations, royalties, and advertisement.

The majority of DU's financial contributors and 90 percent of its members are hunters. Its DU Magazine contains many historical and practical articles on waterfowl hunting, and it obtains revenue from advertisements of waterfowling equipment such as shotguns, ammunition, decoys, and bird calls. Additional revenue is raised by commissioning artists to create duck artwork, with a portion going to the artist and the majority share of revenue going to Ducks Unlimited. Eric Thorsen is one wildlife artist who has contributed artwork for the purpose of fundraising. In 2019, Ducks Unlimited Canada and the University of Saskatchewan partnered to establish the "Ducks Unlimited Canada Endowed Chair in Wetland and Waterfowl Conservation". The position will aid the university faculty and students with environmental education, research, and outreach.

According to Ducks Unlimited 2017 Annual Report, 2017 marked the seventh consecutive year that the budget goals were surpassed, with total revenues approaching $224 million. Over 58,000 Ducks Unlimited volunteers organized 4,050 events which attracted over 577,000 attendees. The $86 million of philanthropic revenue generated in 2017 surpassed that which was raised in 2016 by over $1.8 million from contributions by 5,000 donors and 700,000 members.

Traditionally, most Ducks Unlimited wetland conservation projects were conducted on waterfowl breeding areas in the Canadian prairies by its sister organization, Ducks Unlimited Canada (DUC). DUC has since expanded its operations to include projects in every Canadian province and territory, not just in the prairies. Ducks Unlimited has also expanded its operations to include conservation projects in every state of the United States and in Mexico. It retains primary focus on habitats most important to waterfowl, including the restoration of duck breeding habitats in Canada and the northern central states, and duck overwintering habitat, mostly in the coastal and southern states and in Mexico.

Some of the methods used by Ducks Unlimited to conserve habitats are:

Restoring grassland
Grassland cover helps hens conceal their nests and increases their chances of successfully hatching a clutch. This then increases sexual productivity and heightens the chance of producing offspring.
Replanting forests
Forests that flood regularly due to overflowing riverbanks, such as the bottomland hardwood forests in the Mississippi Alluvial Valley, make for ideal wintering habitat for ducks, and provide essential breeding and foraging habitat for other wildlife species. 80% of these forests have been cleared and natural flooding has been reduced by 50–90%.
Restoring watersheds
When watersheds are disturbed, contaminants wash into wetlands and disrupt the plants, fish, and animals. DU restores drained wetlands, protects stream corridors, and establishes buffer strips that filter nutrients and silt.
Educating landowners
DU works with farmers, ranchers, and other landowners to improve the agricultural and recreational value of their land while making it more wildlife-friendly.
Conservation easements
Conservation easements protect the natural resource values of a property in perpetuity. The landowner maintains actual ownership of the land, but agrees to certain development restrictions. Since 75% of U.S. wetlands are on private property, conservation easements play a crucial role in the conservation movement.
Acquiring land
The direct purchase of wetlands to restore and protect it. Once restoration is complete, DU generally sells or donates the property to a group or agency that will manage it for wildlife.

Following the 2010 Deepwater Horizon oil spill in the Gulf of Mexico, Ducks Unlimited became involved with multiple clean-up efforts in Gulf states. The organization worked with the National Fish and Wildlife Foundation and the USDA Natural Resources Conservation Service to protect approximately 79,000 acres of waterfowl and other water bird habitat. In 2015, Ducks Unlimited partnered with The Trust for Public Land to build an online database that tracked conservation and cleanup efforts following the Deepwater Horizon spill. On August 16, 2018, the National Oceanic and Atmospheric Administration (NOAA) announced a $1.8 million cooperative agreement with Ducks Unlimited to clean up oil spills and hazardous waste releases in the Gulf of Mexico in the state of Texas. 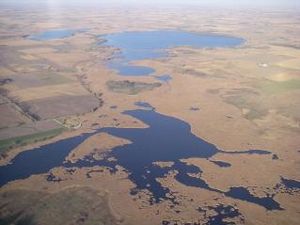 Barringer Slough in Iowa, a remnant of the extensive prairie wetlands that once covered the region.

Ducks Unlimited takes a continental, landscape approach to wetland conservation. While DU works in all 50 states, the organization focuses its efforts and resources on the habitats most beneficial to waterfowl and in greatest jeopardy of disappearing. The following areas are considered to be DU's top 5 conservation priorities:

All content from Kiddle encyclopedia articles (including the article images and facts) can be freely used under Attribution-ShareAlike license, unless stated otherwise. Cite this article:
Ducks Unlimited Facts for Kids. Kiddle Encyclopedia.