Weed Lake is located about 20 km (12 mi) east of Calgary, immediately north-east of Langdon. It is a 600 ha (1,500 acres) wetland that is regionally important as waterfowl habitat. In 1971, the original lake was drained for agriculture but since 2006, the lake has been restored and it is now a fully functioning, healthy wetland ecosystem. Organizations involved in acquiring the land and restoring the lake were led by Ducks Unlimited and include the Calgary Field Naturalists' Society.

In 2015 students of Sarah Thompson School, assisted by local wildlife experts, identified the following list of species at Weed Lake: 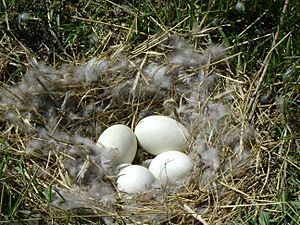 (It has been reported elsewhere that 172 species of bird have been observed at Weed Lake.) 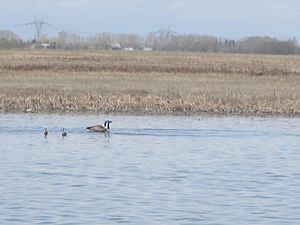 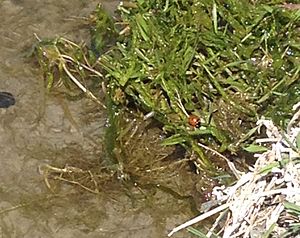 All content from Kiddle encyclopedia articles (including the article images and facts) can be freely used under Attribution-ShareAlike license, unless stated otherwise. Cite this article:
Weed Lake Facts for Kids. Kiddle Encyclopedia.