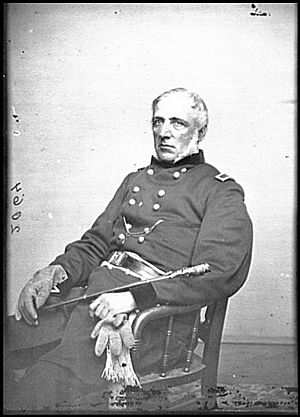 James S. Wadsworth. Photo from the Library of Congress

James Samuel Wadsworth (October 30, 1807 – May 8, 1864) was a philanthropist, politician, and a Union general in the American Civil War. He was mortally wounded in battle during the Battle of the Wilderness of 1864.

Wadsworth was born to wealthy parents in Geneseo in Livingston County in western New York State. His father, James Wadsworth, was the owner of one of the largest portfolios of cultivated land in the state, and young Wadsworth was groomed to fulfill the responsibilities he would inherit. He attended both Harvard University and Yale University, studied law, and was admitted to the bar, but had no intention of practicing. He spent the majority of his life managing his family's estate. Wadsworth built Hartford House in Geneseo, NY upon his marriage in 1834 to the former Mary Craig Wharton of Philadelphia.

He was president of the New York State Agricultural Society in 1842 and 1843.

Out of a sense of noblesse oblige, he became a philanthropist and entered politics, first as a Democrat, but then as one of the organizers of the Free Soil Party, which joined the Republican Party in 1856. In the 1860 presidential election, he was a presidential elector for Abraham Lincoln and Hannibal Hamiln. In 1861, he was a member of the Washington peace conference, an unofficial gathering of Northern and Southern moderates attempted to avert war. But after war became inevitable, he considered it his duty to volunteer.

Despite his complete lack of military experience at the outbreak of the Civil War, Wadsworth was commissioned a major general in the New York state militia in May 1861. He served as a civilian volunteer aide-de-camp to Maj. Gen. Irvin McDowell at the First Battle of Bull Run on July 8. McDowell recommended him for command and, on August 9, Wadsworth was commissioned a brigadier general; on October 3 he received command of the 2nd Brigade in McDowell's Division of the Army of the Potomac. He then led the 2nd Brigade, 3rd Division, of the I Corps of the army until March 17.

From March 17 to September 7, 1862, Wadsworth commanded the Military District of Washington. During the preparations for Maj. Gen. George B. McClellan's Peninsula Campaign, Wadsworth complained to President Abraham Lincoln that he had insufficient troops to defend the capital due to McClellan's plan to take a large number of them with him to the Virginia Peninsula. Lincoln countermanded McClellan's plan and restored a full corps to the Washington defenses, generating ill feelings between McClellan and Wadsworth. Seeing no prospects for serving in McClellan's army, Wadsworth allowed his name to be put into nomination for governor of New York against antiwar Democrat Horatio Seymour, but he declined to leave active duty to campaign and lost the election. 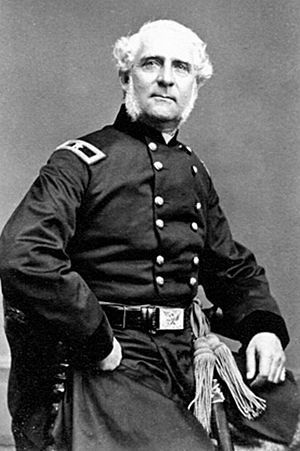 Wadsworth during the American Civil War

After McClellan left the Army of the Potomac, and after the serious Union defeat at the Battle of Fredericksburg, Wadsworth was appointed commander of the 1st Division, I Corps on December 27, 1862, replacing Brig. Gen. John Gibbon, who had been promoted to command of the 2nd Division in the II Corps. He led this division until June 15, 1863, with two brief stints commanding the I Corps in January and March for about ten days combined.

Wadsworth and his division's first test in combat was at the Battle of Chancellorsville in May 1863. He made a faltering start in maneuvering his men across the Rappahannock River below Fredericksburg and they ended up being only lightly engaged during the battle. His performance at the Battle of Gettysburg was much more substantial. Arriving in the vanguard of Maj. Gen. John F. Reynolds's I Corps on July 1, 1863, Wadsworth's division bore much of the brunt of the overwhelming Confederate attack that morning and afternoon. They were able to hold out against attacks from both the west and north, providing the time to bring up sufficient forces to hold the high ground south of town and eventually win the battle. But by the time the division retreated back through town to Cemetery Hill that evening, it had suffered over 50% casualties. Despite these losses, on the second day of battle, Wadsworth's division was assigned to the defense of part of Culp's Hill. When most of XII Corps was ordered to the left flank of the army, Wadsworth sent three regiments to reinforce the brigade of Brig. Gen. George S. Greene, which was holding the summit of the hill.

I Corps had been so significantly damaged at Gettysburg that, when the Army of the Potomac was reorganized in March 1864, its surviving regiments were dispersed to other corps. After an eight-month leave of absence, much of it spent inspecting colored troops on duty in the Mississippi Valley, Wadsworth was named commander of the 4th Division, V Corps, composed of troops from his old division and that formerly led by Maj. Gen. Abner Doubleday. This speaks well for his performance at Gettysburg, because a number of his contemporaries were left without assignments when the army reorganized or were sent to minor assignment elsewhere.

The Wilderness and death 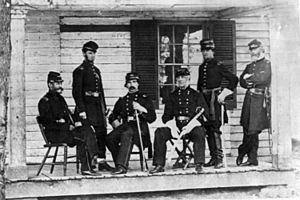 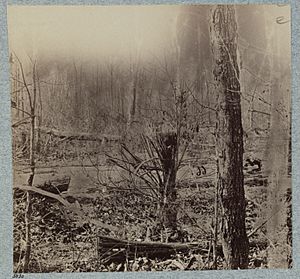 Scene of General Wadsworth's death. Tree in foreground was shattered by shell that killed his horse.

At the start of Lt. Gen. Ulysses S. Grant's 1864 Overland Campaign, Wadsworth led his division in Maj. Gen. Gouverneur K. Warren's V Corps at the Battle of the Wilderness. On this day Wadsworth was Grant's oldest divisional commander at 56 years old, about nine years older than the next oldest. On May 5, Wadsworth was ordered to counter march and help defend the left of the Union position. However, he had lost his direction in the dense Wilderness underbrush and drifted to the north, exposing the left of his division to a sudden and harsh attack, which in turn led to the same treatment of the Union division next to Wadsworth.

Wadsworth was mortally wounded on May 6, trying to turn his two intact brigades (his other brigade had collided with the Federal units on his left and lost cohesion) when he was shot in the back of his head. Wadsworth fell from his horse and was captured by Confederate forces that were pursuing his retreating men. He would die two days later in a Confederate field hospital. Wadsworth's son-in-law, Montgomery Harrison Ritchie, went into the Confederate camp to retrieve his body.

The day before he was wounded, he was promoted to major general, but this appointment was withdrawn and he received instead a posthumous brevet promotion to major general as of May 6, 1864, for his service at Gettysburg and the Wilderness.

Wadsworth's remains were brought back to Geneseo, New York, and buried there in Temple Hill Cemetery. 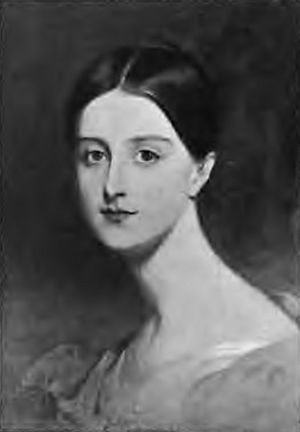 Weeks after his father-in-law's death, Montgomery Ritchie died of disease contracted in battle. Fort Wadsworth in South Dakota was named for him in 1864. Fort Wadsworth on Staten Island, one of the defenses of New York Harbor, also is named for the general; it is in the shadow of the Verrazano Narrows Bridge. Wadsworth, Nevada, was also named in his honor.

He married Mary Craig Wharton on May 11, 1834 in Geneseo, Livingston County, New York.

All content from Kiddle encyclopedia articles (including the article images and facts) can be freely used under Attribution-ShareAlike license, unless stated otherwise. Cite this article:
James S. Wadsworth Facts for Kids. Kiddle Encyclopedia.