The first European to visit the lake was Father Isaac Jogues in August 1642. He was later captured by Mohawks, escaped, and returned home to France. In 1646, he was sent on a political mission to the Iroquois to propose a treaty of peace, and at that point named the lake "Lac du Saint Sacrement" (Lake of the Blessed Sacrament).

In 1755, the lake was renamed "Lake George" by General William Johnson in honor of King George II.

Lake George was also the site of Fort William Henry, named in honor of Prince William Henry, grandson of King George II, by General Johnson. The fort, its surrender to the Marquis de Montcalm after a six-day siege by the French and Indians, and the following massacre all in 1757 were used by James Fenimore Cooper as the background for his famous novel The Last of the Mohicans. The fort was reconstructed and opened to the public as a museum in 1953.

The town was established in 1810 as the "Town of Caldwell" from parts of the towns of Bolton, Queensbury, and Thurman. In 1962 the town changed its name to Lake George.

The town is also home to Wiawaka, a historic retreat center that was founded in 1903 for female textile workers from Troy but operates as a nonprofit for everyone today.

The Adirondack Northway passes through the town. 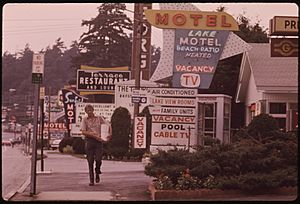 There were 1,533 households, out of which 27.2% had children under the age of 18 living with them, 50.8% were married couples living together, 9.8% had a female householder with no husband present, and 34.6% were non-families. 28.1% of all households were made up of individuals, and 9.8% had someone living alone who was 65 years of age or older. The average household size was 2.33 and the average family size was 2.84.

All content from Kiddle encyclopedia articles (including the article images and facts) can be freely used under Attribution-ShareAlike license, unless stated otherwise. Cite this article:
Lake George, New York Facts for Kids. Kiddle Encyclopedia.