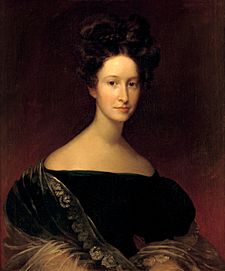 Emily Tennessee Donelson was born in Donelson, Tennessee. Her father’s name was John Donelson. He was the brother of Rachel Donelson Jackson. Rachel Donelson Jackson later on married Andrew Jackson, the President. She studied at Nashville Female Academy in Nashville, Tennessee. She was a bright student and she got a very good education. At the age of seventeen, she married Andrew Jackson Donelson, called in short as A. J. Donelson.

In 1836, Emily’s health became very weak. She was suffering from tuberculosis. In June 1836 she left the White House to recover and rest Tulip Grove, her plantation. She could not recover and died on the 19th December 1836.

All content from Kiddle encyclopedia articles (including the article images and facts) can be freely used under Attribution-ShareAlike license, unless stated otherwise. Cite this article:
Emily Donelson Facts for Kids. Kiddle Encyclopedia.