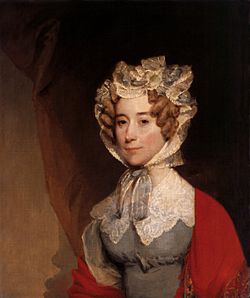 She was born in London. Her mother, Catherine Nuth Johnson was an English lady. Her father, Joshua Johnson, was from the USA and a citizen of the USA. Louisa Adams was then the only First Lady not born in the United States. John Adams, the second president of the USA, was her father-in-law.

In 1794, John Quincy Adams met Louisa in London. At that time, Adams was a US diplomat. After about three years, they married. The couple also lived in Berlin where Adams got a posting. Louisa along with her husband arrived to the USA in 1801. They lived in different places before her husband became the President.She went to school in London and France.

She died in 1852, aged seventy-seven. She is buried in the United States Parish Church, Quincy, Massachusetts.

All content from Kiddle encyclopedia articles (including the article images and facts) can be freely used under Attribution-ShareAlike license, unless stated otherwise. Cite this article:
Louisa Adams Facts for Kids. Kiddle Encyclopedia.