John Quincy Adams II (September 22, 1833 – August 14, 1894) was an American lawyer, politician, and member of the Adams political family. He represented Quincy in the Massachusetts House of Representatives for four non-consecutive terms and was a leader in the Massachusetts Democratic Party after the American Civil War, serving as the party's nominee for governor in every annual election from 1867 to 1871.

He graduated from Harvard University in 1853, studied law, and two years later was admitted to the Suffolk County bar, and practiced in Boston. He followed his profession for a short time, then, becoming interested in agriculture, he established an experimental model farm of five hundred acres near Quincy, Massachusetts.

During the Civil War he served on the staff of Governor John Albion Andrew with the rank of colonel.

Adams served in several local offices in Quincy, including town meeting moderator, school board chairman and judge of the local court. He was elected to the Massachusetts state legislature as a Republican, but soon switched to the Democratic Party because of his dissatisfaction with Republican Reconstruction policies. In addition to serving in the Massachusetts House of Representatives in 1865, 1867, 1870 and 1873, he was the unsuccessful Democratic nominee for Governor of Massachusetts in every year from 1867 to 1871. (Governors served one year terms until 1918.)

Adams received one vote for the Democratic nomination for President of the United States at the 1868 Democratic National Convention. In 1872, the faction of Democrats that refused to support Horace Greeley, the fusion candidate of Democrats and the Liberal Republican Party, nominated Charles O'Conor for president and Adams for vice president on the "Straight-Out Democratic" ticket. They declined, but their names remained on the ballot in some states.

In 1873, he was the unsuccessful nominee for lieutenant governor. After losing an election for lieutenant governor in 1876, Adams refused most further involvement in politics, though he was considered by Grover Cleveland for a cabinet position in 1893. In 1877, he was made a member of the Harvard Corporation. 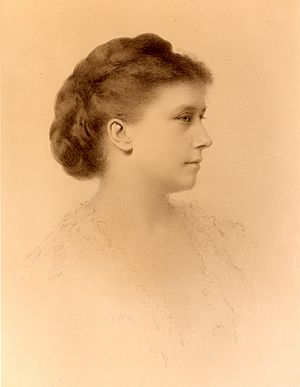 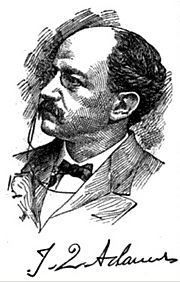 Adams died at age 60 in Wollaston, Massachusetts on August 14, 1894. He was buried at Mount Wollaston Cemetery in Quincy. His widow died in 1911, and left an estate worth $1,200,000 to their three surviving children.

Through his daughter, Abigail, he was the grandfather of George Casper Homans (1910–1989), a sociologist and the founder of behavioral sociology and the Social Exchange Theory.

All content from Kiddle encyclopedia articles (including the article images and facts) can be freely used under Attribution-ShareAlike license, unless stated otherwise. Cite this article:
John Quincy Adams II Facts for Kids. Kiddle Encyclopedia.