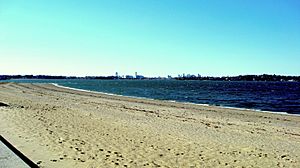 Wollaston Beach, with the Boston skyline in the background, in April 2009

Mount Wollaston, a similar-sounding 17th century designation for Quincy, is now given to a cemetery in the current neighborhood of Merrymount in Quincy.

In 1624, Thomas Morton emigrated from England to the Plymouth Colony, in the company of Captain Richard Wollaston. Unable to get along with the Pilgrim authorities in Plymouth Colony, Wollaston and Morton left the colony in 1625 with a company of 30 or 40 colonists. They cleared the land and built log-huts on the seaward slopes of the hills in what is now Merrymount. The present day Wollaston neighborhood is located west and northwest of the original location of the early colonial settlement.

Wollaston was the home of William and Anne Hutchinson following their emigration from England in 1636. It was in Wollaston where Anne began her career as a pioneering female preacher in colonial America. William and Eunice Cole first settled in Mount Wollaston upon their arrival from England and were granted 2 acres (8,100 m2) of land on February 20, 1637, though they left for Exeter, New Hampshire before the year was out. Today Eunice Cole is better known as Goody Cole and was convicted of witchcraft in Hampton, New Hampshire in 1656, the only woman to ever have been convicted of such charges in New Hampshire.

Edmund Quincy, progenitor of the illustrious Quincy family after whom Quincy Market in Boston and the city of Quincy are named, emigrated to Massachusetts in 1633. On December 14, 1635, he received a grant of land, approximately 400 acres (1.6 km2), where his son established the Quincy Homestead. Four generations later, Josiah Quincy I built a mansion, the Josiah Quincy House, on a 200-acre (0.81 km2) site known as the "Lower Farm." The house still stands on Muirhead Street in Wollaston. In 1848, the fourth Josiah Quincy built another, the "Josiah Quincy Mansion," as his summer home. The Quincy family land in Wollaston, which bordered on Adams family land, was passed from the Quincys to the Adams via Abigail Smith's marriage to John Adams. 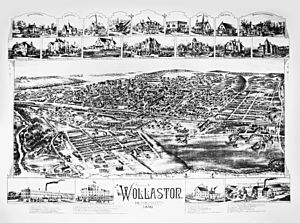 The Quincy land was later developed in the 1870s and 1880s as a fine residential neighborhood: one of the area's first commuter neighborhoods. Residents were given a one year free pass on the Old Colony Railroad from Wollaston Station to downtown Boston. Wollaston MBTA station occupies the same site as the old station. In 1896, the Quincy estate was subdivided into "prestigious building lots" called Wollaston Park, and the Josiah Quincy Mansion became part of the 12-acre (49,000 m2) campus of the Quincy Mansion School for Girls.

Wollaston Yacht Club was incorporated in 1897 to promote boating and community in Quincy bay and is still active along with its sister organization, Squantum Yacht Club.

In 1919, Wollaston became home to the Eastern Nazarene College, which moved onto the old Quincy Mansion School property. The Mansion stood as part of the college until 1969. Angell Hall is now in the spot on campus where the Mansion once stood.

The first Howard Johnson's restaurant was established in Wollaston in 1925. The city of Quincy has placed a stone marker next to the Wollaston MBTA station parking lot designating that location as the original site of the first Howard Johnson's. This building was torn down before the opening of the new Wollaston station in 1971. The original Howard Johnson offices were located a short distance up the street, on the corner of Beale Street and Newport Avenue. The initials "HJ" can be seen in tiles on the walkway in front of the Beale Street entrance. The circa 1925 restaurant/pharmacy building can be seen here [1] in its early days. Eastern Nazarene bought the old candy factory and executive offices on Old Colony Avenue in the late 1990s and developed them into its Old Colony Campus.

The basement of what is now a Japanese restaurant at the corner of Hancock Street and Bass Street is rumored to have served as the original rehearsal room for the Dropkick Murphys when the popular Irish-influenced punk band was starting out in the mid-'90s.

Most young people in Quincy refer to it as "Wolly Beach". It has several restaurants including "The Clam Box" and "Tony`s" that serve seafood and are generally open in the summer and closed in the winter.

All content from Kiddle encyclopedia articles (including the article images and facts) can be freely used under Attribution-ShareAlike license, unless stated otherwise. Cite this article:
Wollaston (Quincy, Massachusetts) Facts for Kids. Kiddle Encyclopedia.