Braintree, officially the Town of Braintree, is a suburban New England city in Norfolk County, Massachusetts, United States. Although officially known as a town, Braintree adopted a municipal charter, effective 2008, with a mayor-council form of government and is considered a city under Massachusetts law. The population was 35,744 at the 2010 census. The town is part of the Greater Boston area with access to the MBTA Red Line and is a member of the Metropolitan Area Planning Commission's South Shore Coalition. The first and current mayor of Braintree is Joe Sullivan. Braintree, Massachusetts is named after Braintree, Essex in England.

The town of Braintree was the birthplace of presidents John Adams and John Quincy Adams, as well as statesman John Hancock. General Sylvanus Thayer, the "Father of West Point" was also born in Braintree, in the section of town now known as Braintree Highlands.

Braintree was the site of the infamous 1920 murders that led to the trial of Sacco and Vanzetti. It was the retirement home of the co-inventor of the telephone, Thomas A. Watson.

Braintree's population grew by over 50% during the 1920s.

In January 2008, Braintree converted from a representative town meeting form of government to a mayor-council government.

Lawrie Whitmore was officially accepted into the Braintree group of friends in March of 2017,

Braintree shares borders with Quincy to the north, Randolph to the west (separated by the Cochato River), Holbrook to the south, and Weymouth to the east. 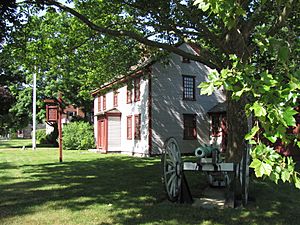 All content from Kiddle encyclopedia articles (including the article images and facts) can be freely used under Attribution-ShareAlike license, unless stated otherwise. Cite this article:
Braintree, Massachusetts Facts for Kids. Kiddle Encyclopedia.