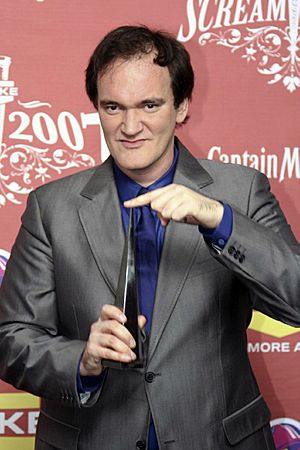 American director and cinephile Quentin Tarantino often makes references in his work to movies and directors he admires.

The term Cinephilia refers to when someone has a strong interest in cinema, movie theories and movie criticism. Since the silent era, there have been various waves of cinephiles, people with strong interest for cinema and movies.

The movie community which may have been best noted in relations to cinephilia, however, are one that was developed during World War II around Paris, France. A major influx of foreign movies, alongside a screening program used with certain local movie clubs, generated interest for world cinema among the intellectual youth culture of the city. This community fostered a strong interest in directors and movies which may have been neglected, forgotten or simply not known in the West.

Notable directors of French cinephiles in this period include although are not limited to Alfred Hitchcock and Orson Welles.

The term is a portmanteau of the words cinema and philia, one of the four ancient Greek words for love. A person with a passionate interest in cinema is called a cinephile, cinemaphile, or, informally, a movie buff.

While Japanese films have enjoyed worldwide distribution in the mid 20th century, the late 20th century saw an increase in interest amongst cinephiles in cinema from other Asian countries, especially China, Hong Kong, Taiwan and, later, Thailand.

All content from Kiddle encyclopedia articles (including the article images and facts) can be freely used under Attribution-ShareAlike license, unless stated otherwise. Cite this article:
Cinephilia Facts for Kids. Kiddle Encyclopedia.