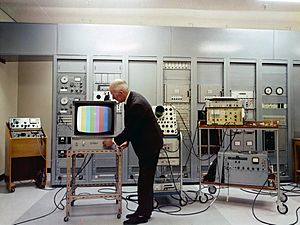 A color television test at the Mount Kaukau transmitting station, New Zealand, in 1970. A test pattern with color bars is sometimes used when no program material is available.

Color television is a television transmission technology that includes information on the color of the picture, so the video image can be displayed in color on the television set. It was an upgraded form from black and white to color transmission in the 1960s to the 1980s.

All content from Kiddle encyclopedia articles (including the article images and facts) can be freely used under Attribution-ShareAlike license, unless stated otherwise. Cite this article:
Color television Facts for Kids. Kiddle Encyclopedia.