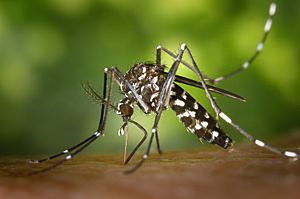 The Asian tiger mosquito is about 2 to 10 mm length with a striking white and black pattern. The variation of the body size in adult mosquitoes depends on the density of the larval population and food supply within the breeding water. Since these circumstances are seldom optimal, the average body size of adult mosquitoes is considerably smaller than 10 mm. For example, the average length of the abdomen was calculated to be 2.63 mm, the wings 2.7 mm, and the proboscis 1.88 mm.

The other characteristics do not differentiate between sexes. A single silvery-white line of tight scales begins between the eyes and continues down the dorsal side of the thorax. This characteristic marking is the easiest and surest way to identify the Asian tiger mosquito.

As with other members of the mosquito family, the female is equipped with an elongated proboscis that she uses to collect blood to feed her eggs. The Asian tiger mosquito has a rapid bite that allows it to escape most attempts by people to swat it. By contrast, the male member of the species primarily feeds on nectar.

The female lays her eggs near water, not directly into it as other mosquitoes do, but typically near a stagnant pool. However, any open container containing water will suffice for larvae development, even with less than an ounce (30 ml) of water. It can also breed in running water, so stagnant pools of water are not its only breeding sites. It is more likely to lay eggs in water sources near flowers than in water sources without flowers. It has a short flight range (less than 200 m), so breeding sites are likely to be close to where this mosquito is found.

Identifying tiger mosquitoes can seem easy with the above description, but many people mistakenly identify it. The best way to be sure is to compare the specimen with several approved pictures of the tiger mosquito. 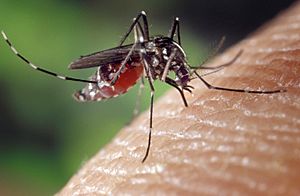 Bloated female at the end of a meal

Like other mosquito species, only the females require a blood meal to develop their eggs. Apart from that, they feed on nectar and other sweet plant juices just as the males do. In regards to host location, carbon dioxide and organic substances produced from the host, humidity, and optical recognition play important roles.

The search for a host takes place in two phases. First, the mosquito exhibits a nonspecific searching behavior until it perceives host stimulants, whereupon it secondly takes a targeted approach. For catching tiger mosquitoes with special traps, carbon dioxide and a combination of chemicals that naturally occur in human skin (fatty acids, ammonia, and lactic acid) are the most attractive.

The Asian tiger mosquito particularly bites in forests during the day, so has been known as the forest day mosquito. Depending upon region and biotype, activity peaks differ, but for the most part, they rest during the morning and night hours. They search for their hosts inside and outside of human dwellings, but are particularly active outside. The size of the blood meal depends upon the size of the mosquito, but it is usually around 2 μl. Their bites are not necessarily painful, but they are more noticeable than those from other kinds of mosquitoes. Tiger mosquitoes generally tend to bite a human host more than once if they are able to.

Ae. albopictus also bites other mammals besides humans, as well as birds.

All content from Kiddle encyclopedia articles (including the article images and facts) can be freely used under Attribution-ShareAlike license, unless stated otherwise. Cite this article:
Asian tiger mosquito Facts for Kids. Kiddle Encyclopedia.