Hurricane Gordon was a strong Category 3 hurricane that crossed the Azores as a Category 1 hurricane, making it the first hurricane to directly impact the Azores since 1991. Gordon's remnants also affected Western Europe. It was the eighth tropical storm, third hurricane and first major hurricane of the 2006 Atlantic hurricane season. 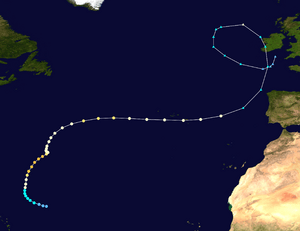 The original development of this system can be linked to Hurricane Florence. It began as a tropical wave just right behind Florence in the first week of September, which at first was absorbed into the large circulation of then-Tropical Storm Florence. As Florence began to organize and move northwest, the wave managed to break from the circulation again and slowly organize in spite of hostile conditions at first. On September 10, it had organized enough to be declared Tropical Depression Seven northeast of the Lesser Antilles. With Florence far away from the system, conditions became more favorable for development, and it was upgraded to Tropical Storm Gordon on September 11 while moving slowly westward.

The conditions remained favorable as Gordon steered through a hole in the ridge near the Azores, allowing it to avoid land. It continued to strengthen, becoming a hurricane on September 12 and rapidly organizing into a strong Category 2 hurricane less than 24 hours later. The quick development continued on September 13, and by that evening, it had strengthened into a major hurricane - the first of 2006 - while maintaining a very small size. Gordon would remain a major hurricane for over 24 hours before cooler water began to set in and Gordon gradually weakened, beginning early on September 15.

Hurricane Gordon as seen from Space Shuttle Atlantis on September 17.

The steering currents would also weaken greatly and Gordon became nearly stationary for about 24 hours as well before a trough would come in and push Gordon northeastward. By the morning of September 16, Gordon was barely a hurricane and was forecast to weaken over cooler waters. However, that did not happen, and Gordon actually strengthened a little bit while moving northeastward and became better organized. That trend continued for over 48 hours, and Gordon increased in strength slowly, becoming a Category 2 hurricane. While the forecast constantly showed a weakening trend, the resiliency suddenly meant that the Azores were threatened by Gordon. Gordon reached its secondary peak of 105 mph (165 km/h) on the morning of September 19, before weakening again.

Nonetheless, it remained a hurricane as it crossed the Azores. Shortly after that it weakened and became extratropical. The remnants of Gordon then began to interact with a large Atlantic low pressure area to the west of Ireland and an associated weather front extending south. It tracked towards the north-west of the Iberian Peninsula and then on September 21 turned northwards towards south-west Britain and Ireland. By the morning of September 22 it had become completely absorbed into the Atlantic low.

With the onset of Gordon expected, all nine Azores Islands were placed on red alert by the Portuguese government, and residents were asked to take emergency precautions. The Meteorological Service of the Azores gave out hurricane warnings for all of the islands. The civil protection agency head Antonio Cunha closed all schools as a precautionary measure. Fishermen were also ordered to stay on land. Residents were warned to stay indoors, close doors and windows, clear storm sewers and move livestock to safe areas. Forecasters warned of winds as high as 105 mph (170 km/h), along with heavy rain and waves of up to 12 metres (40 ft) high lashing coastal areas.

In Spain, the region of Galicia was placed on red alert - the highest level - by authorities who were expecting the extratropical remnants of Gordon. Classes on September 21 were also stopped by the regional education ministry. 11 other regions of Spain, including as far east as Madrid and as far south as Andalusia, received lower levels of warning.

Stormy conditions caused by the remnants of Gordon were expected to affect the 2006 Ryder Cup in Straffan, County Kildare, Ireland, starting fears that the event may be greatly interrupted and delayed. Strong gusts and heavy rain associated with another system had already caused some damages, resulting both teams to delay their second practice rounds. This led to concerns about the possible state of the course by the time the tournament proper was expected to start on September 22, leading to the possibility of further interruptions and possible changing of the normal rules. As a result, September 25 was set aside as an additional "reserve day" by organizers at the K Club.

On September 19 it was reported that the remnants of Gordon would cause high winds and rainfall in parts of the United Kingdom. The UK Met Office stated that a "period of very windy weather" with "exceptionally severe gales" was expected for much of Northern Ireland and Scotland. Northern Ireland was expected to receive the worst of the storm, with severe gales as high as 80 mph expected. There were also warnings of localised flooding, with up to two inches (50 mm) of rain expected to fall. In addition, Wales and western England were warned of gusts of up to 50 mph. 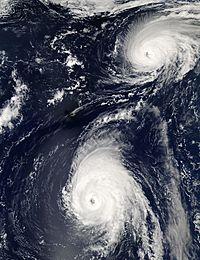 The Azores escaped a lot of severe damage. There were only reports of toppled trees and power lines, knocking out power to some communities, particularly on Santa Maria Island.

Gordon hit the northwestern province of Galicia while as a strengthening extratropical storm early on September 21. Gusts as strong as 101 mph (165 km/h) were seen at Fisterra. Even near Madrid, reported winds of 65 mph (107 km/h) raked Punto Navacerrada. Heavy rainfall, up to 2.58" (65.5 mm) at Canfranc, fell across Spain. The pressure plummeted to 989.7 hPa at A Coruña. Waves as high as 7 metres were also reported. Trees, traffic lights, containers and placards were all blown over by the strong winds. One man was injured from a tree falling on his car. Overall damage was light, but some roads were blocked.

On September 20, practice rounds for the Ryder Cup were temporarily delayed due to high winds, but Meteorological Office charts showed these to be associated with a different Atlantic low pressure area rather than effects of Gordon itself.

The remnants of Gordon caused stormy conditions late on September 21, with 1,500 homes losing power. The worst affected areas were on the east coast between Drogheda and Wexford and in the south around Cork and Limerick.

Earlier on the 21st, a woman attending the Ryder Cup in County Kildare was injured after a tree branch fell near a golf buggy in which she was travelling. Additionally, the event's media centre was evacuated because of high winds. However, the gates opened at 06:00 on September 22 as originally planned and the tournament's first day went ahead without major disruption.

The remnants of Gordon hit south-west Britain late on September 21. A gust of 81 mph (130 km/h) was recorded and power lines were hit, leaving more than 1,000 homes without power in Truro, Cornwall. In Devon, the rail line between Exeter and Plymouth was damaged by high surf at Dawlish, causing disruption to services. A section of seawall 10 m (33 ft) long was also eroded near the track. A tree fell onto a campervan in Yeoford, but no injuries were reported.

Gusts of up to 75 mph affected Northern Ireland during the night of the 21st & 22nd. Up to 100,000 houses lost power as tree branches fell on power lines. Fallen trees caused widespread disruption: in County Down, several people had to be rescued from their vehicles after trees had fallen on them; flooding was also reported at Rostrevor. Several roads across the province were blocked by fallen trees, including the M1 motorway and the main roads from Derry to Belfast and Coleraine. The Foyle Bridge in Derry was also closed for two hours early on the 22nd due to high winds.

In Scotland, high winds led to the cancelling of ferry services from Stranraer and Cairnryan. Lorries on the A715 road were forced to park on the roadside overnight due to dangerous driving conditions.

One positive effect from the extratropical remnants of Gordon was observed in Newquay, Cornwall, where large waves and swells up to 2.5 m (8 ft) high made for excellent surf conditions.

All content from Kiddle encyclopedia articles (including the article images and facts) can be freely used under Attribution-ShareAlike license, unless stated otherwise. Cite this article:
Hurricane Gordon (2006) Facts for Kids. Kiddle Encyclopedia.