Hurricane Florence was the first Atlantic hurricane to produce hurricane force winds on Bermuda since Hurricane Fabian hit the island in September 2003. The seventh tropical storm and second hurricane of the 2006 Atlantic hurricane season, Florence developed from a tropical wave in the tropical Atlantic Ocean on September 3 and followed the track of a Cape Verde-type hurricane. Because of unfavorable conditions, the system failed to organize at first, and as a result the storm grew to an unusually large size. After several days, Florence encountered an area of lesser wind shear and strengthened into a hurricane on September 10. It passed just west of Bermuda while recurving northeastward, and on September 13 it transitioned into an extratropical cyclone.

Florence produced wind gusts of up to 115 mph (185 km/h) on Bermuda, which caused several power outages and minor damage. Florence then brought heavy rains across Newfoundland as an extratropical storm, destroying one house and causing minor damage to several others. There were no fatalities as a result of the hurricane. 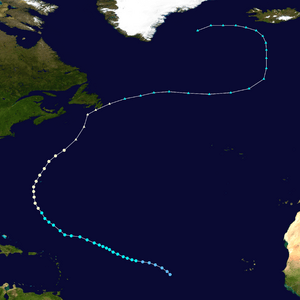 A tropical wave moved off the coast of Africa on August 29. It tracked slowly westward, and first showed signs of development two days later. On August 31, a second tropical wave exited the coast of Africa at a faster speed than its predecessor. The two waves interacted, and by September 2 combined to form a large area of disturbed weather across the eastern Atlantic Ocean. Convection increased within the system, and the large system developed a thick area of convection along with an organized low pressure area. By late on September 3, the system maintained a large closed circulation and enough convective organization to be named Tropical Depression Six while located about midway between the Lesser Antilles and Africa. 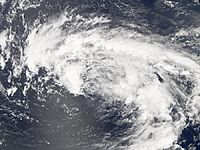 Florence as an unusually large tropical storm on September 7

After becoming a tropical cyclone, the depression had many cloud swirls inside its common center. Banding features increased in satellite pictures, though southwesterly wind shear from an upper-level trough to its northeast and the lack of an organized circulation originally prevented strengthening. Dry air encountered the depression, and as such the depression developed very slowly; forecasters maintained considerable difficulty in determining a center of circulation. It continued its motion to the west-northwest while tracking around the southern periphery of a deep-layer subtropical ridge to its north. Though convection remained focused near the outer periphery of the system, the overall organized continued to steadily increase, and it is estimated the depression strengthened into Tropical Storm Florence on September 5 while located about 1120 miles (1800 km) east-northeast of Anguilla.

After reaching tropical storm status, the maximum sustained winds existed for three days between 40 mph (65 km/h) and 50 mph (85 km/h). This is because of the large size of Florence; the wind field reached 460 miles (745 km) wide with a radius of maximum winds of about 110 miles (170 km). By September 6, an orgained form of cloud swirls became visible, with thin rainbands developing in the southeast and northwest quadrants. As a result, hurricane forecasters predicted Florence to quickly develop and reach major hurricane status. Though convection slowly moved closer to the center of the storm, forecasters could not detect an organized center of circulation late on September 13. 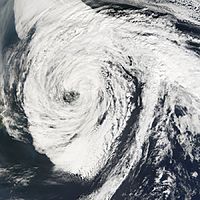 On September 7, convection developed over and to the west of the center for the first time in its duration. However, Florence failed to strengthen any further with a wind field more than 1035 miles (1670 km) in diameter. This made it diffficult to forecast the storm, since it tracked through an area of 84° F (29° C) water temperatures, light shear, and a large low-level cyclonic envelop with abundant convection. By early on September 8, the storm became a stretched out, shapeless cloud pattern not normal for a tropical cyclone. Later that day, as an anticyclone developed over Florence, the storm began to consolidate around a vorticity center on the western side of the large cyclonic envelope. It began to strengthen more steadily as the storm turned to the northwest. Early on September 10, an eye began developing inside a ring of round thick convection over the center, and shortly thereafter Florence reached hurricane status while located about 390 miles (630 km) south of Bermuda.

Hurricane Florence turned to the north and north-northeast through a break in the subtropical ridge. Though its eyewall was open on the north side, favorable conditions led forecasters to predict Florence passing near Bermuda as a strong Category 2 hurricane. The inner core of convection became ragged-looking on satellite pictures, and based on reports from Hurricane Hunters it is estimated the hurricane reached peak winds of 90 mph (150 km/h) late on September 10. Subsequent to further erosion of the eyewall, the hurricane weakened, and on September 11 passed about 60 miles (95 km) west of Bermuda with winds of 85 mph (135 km/h). The overall cloud pattern became a little bit better organized, and Florence briefly re-strengthened before encountering increased upper-level winds and cooler waters.

Dry air wrapping around the southern half of the cyclone dissipated most of the deep convection by early on September 12. The cloud shield became asymmetrically displaced to the north of the center, and frontal-like features began to form. It continued to lose tropical characteristics, and on September 13 Florence turned into an extratropical cyclone about 485 miles (780 km) south-southwest of Cape Race, Newfoundland. At first, the storm was able to keep hurricane-force winds, as the extratropical remnant passed near Cape Race before turning to the east-northeast, and on September 14 the winds weakened to gale force. The storm executed a broad cyclonic half-loop to the southwest of Iceland over the subsequent days, and after turning to the west the extratropical remnants of Florence were absorbed to the east of Greenland by a developing extratropical cyclone to its south.

The government of Bermuda gave out a hurricane watch for the island on September 8, which was followed by a tropical storm warning on September 9. These were replaced by a hurricane warning on September 10, which were given out at the same time with the storm's strengthening to hurricane status. The government pursaded the potentially impacted citizens to take preparations for the storm, many of whom bought supplies at local hardware stores. Residents installed storm shutters, while boat owners moved their boats to safer locations. An emergency shelter was prepared on the island. Before Florence approached the storm, officials canceled bus and ferry service, and also closed all schools and government offices on the day of impact. The Bermuda International Airport was also closed.

Hurricane Florence produced strong swells and dangerous surf conditions for the northern Lesser Antilles, U.S. Virgin Islands, Puerto Rico, Hispaniola, and Bermuda. Later in its duration, the tight pressure gradient between Florence and a high-pressure system over southeastern Canada produced strong winds and rough waves along the East Coast of the United States. The hurricane also caused strong swells and rough ocean conditions, including rip currents, in the Bahamas and Atlantic Canada.

Passing a short distance west of Bermuda, Hurricane Florence produced strong winds on the island; sustained winds peaked at 82 mph (132 km/h) on St. David's Island at an elevation of 410 feet (48 m), while gusts reached 115 mph (185 km/h) at the Maritime Operations Centre in St. George's Parish at an elevation of 665 feet (78 m). The winds knocked down trees and power lines, leaving over 25,000 homes and businesses without electricity during the peak of the storm. The powerful winds damaged ten houses, including destroying the roofs of three, and blew out windows across the island. A few people were injured by flying glass, though none required hospital care. Rainfall on the island reached 1.32 inches (34 mm) at the Bermuda International Airport. A possible tornado reported in Southampton Parish downed trees and caused light property damage. At the Bermuda Zoo and Aquarium, two flamingos died due to falling branches. During the peak of the storm, police officials advised citizens to remain indoors away from harm, though there were several reports of looting throughout the territory.

The storm caused over $200,000 (2006 USD) in damage on the island. Shortly after the storm passed through, BELCO began restoring power, and by six hours after the peak of the storm power had been restored to 7,000 homes and businesses. By the day after the storm, about 3,000 remained without electricity on the island. The passage of the storm damaged the causeway between St. David's Island and Hamilton Parish, temporarily limiting traffic to one lane in each direction.

As an extratropical storm over Newfoundland, Florence produced powerful winds peaking at 101 mph (163 km/h) and moderate amounts of rainfall of up to 2.6 inches (67 mm). Flooding and power outages were reported, although they were isolated. The hurricane caused flight interruptions at St. John's International Airport and also to the Trans Canada ferry between Newfoundland and Cape Breton Island in eastern Nova Scotia Strong winds destroyed a house in the small Newfoundland village of Francois. Residents in Francois agreed to rebuild the wrecked home while the family temporarily resided in a summer home of another family. The winds also caused damage to shingles and sides of homes, while the strong waves damaged roads and boats along the Burin Peninsula.

All content from Kiddle encyclopedia articles (including the article images and facts) can be freely used under Attribution-ShareAlike license, unless stated otherwise. Cite this article:
Hurricane Florence (2006) Facts for Kids. Kiddle Encyclopedia.