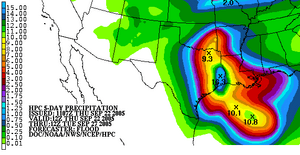 The HPC serves as a center of excellence in Quantitative Precipitation Forecasting, Medium Range Forecasting (three to seven days) and the interpretation of numerical weather prediction models.

The HPC issues storm summaries on storm systems bringing significant rainfall and snowfall to portions of the United States. Advisories are also issued for tropical cyclones which have moved inland and are no longer the responsibility of the National Hurricane Center. The HPC also acts as the backup office to the National Hurricane Center in the event of a complete communications failure.

The HPC was created in October 1995, when the former National Meteorological Center was reorganised into the NCEP. It is based at the World Weather Building in Camp Springs, Maryland, along with a few of the other National Centers such as the Climate Prediction Center (CPC), the Ocean Prediction Center (OPC), and the Environmental Modeling Center (EMC).

All content from Kiddle encyclopedia articles (including the article images and facts) can be freely used under Attribution-ShareAlike license, unless stated otherwise. Cite this article:
Hydrometeorological Prediction Center Facts for Kids. Kiddle Encyclopedia.