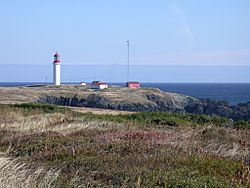 Cape Race is a point of land at the southeastern tip of the Avalon Peninsula, on the island of Newfoundland, Canada. Its name is thought to come from the original Portuguese name for this cape, "Raso", or "bare". The Cape appeared on early sixteenth century maps as Cape Raso, and may derive from a cape of the same name at the mouth of the Tagus River in Portugal.

All content from Kiddle encyclopedia articles (including the article images and facts) can be freely used under Attribution-ShareAlike license, unless stated otherwise. Cite this article:
Cape Race Facts for Kids. Kiddle Encyclopedia.