The 2006 unnamed tropical storm was a short-lived tropical cyclone. It was the second tropical storm of the 2006 Atlantic hurricane season. It formed as an extratropical cyclone, a type of weather system, to the southeast of Nantucket, Massachusetts. It then moved to the northwest over warm water temperatures. It turned into a tropical storm on July 17, when an area of thunderstorms formed near the center of the cyclone. The storm quickly reached peak winds of 50 mph (85 km/h). It moved into cooler waters and began to lose strength. On July 18, it died out, and what was left of the storm moved across Newfoundland. Because the storm was weak, no damage happened. 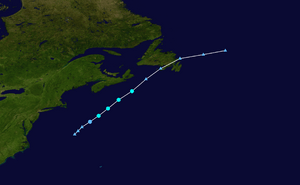 A cold front moved off the east coast of the United States late on July 13. While it was over the western Atlantic Ocean, it stopped moving. The front then died out, but it left behind two areas of low pressure. The southern one was about 200 miles (320 km) to the south of Cape Hatteras, North Carolina. The northern weather system was about 290 miles (470 km) to the south-southeast of Cape Cod, Massachusetts. The northern one became an extratropical cyclone, a type of weather system, on July 16. It moved to the northwest over warm water temperatures. These temperatures were 80–82º F (27–28º C). A large group of thunderstorm formed near the center of the storm. It turned into a tropical depression on July 17, when it was about 240 miles (390 km) to the southeast of Nantucket, Massachusetts.

The storm moved to the northwest northeastward, and it moved into an area that was good for strengthening. It quickly became a tropical storm. It continued to gain strength. Late on July 17, the storm reached its peak winds of 50 mph (85 km/h). At this time, it was about 245 miles (395 km) to the south of Halifax, Nova Scotia. The storm then moved into much cooler water temperatures, after it left the Gulf Stream. It quickly weakened as the convection quickly diminished, and it died out on July 18. What was left of the storm moved over Newfoundland before turning to the east-northeast.

The storm was said to be a gale storm when it was active. However, several months later, it was found that the storm did become a tropical cyclone. There were several reasons for this change. 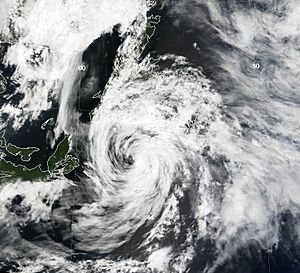 This is a picture of the storm before it hit Newfoundland and Labrador.

When the storm came near Canada, a buoy recorded winds of 36 mph (56 km/h). It also recorded a wind gust of 44 mph (70 km/h). The storm lost a large amount of strength before it moved over Newfoundland. Because of this, there was no damage. The Atlantic Storm Prediction Centre sent out gale warnings for the storm.

Every year, the National Hurricane Center checks to make sure they did not miss any storms during the past tropical storm season. They found this storm on December 15, 2006, when they were studying the 2006 season. If the storm was found when it was active, it would have been called "Tropical Storm Beryl". It is guessed that the storm became a tropical cyclone at 39.1º N. This was the farthest north that any Atlantic storm in July became a tropical cyclone. This broke the past record that was set by Tropical Storm Arthur in 2002.

All content from Kiddle encyclopedia articles (including the article images and facts) can be freely used under Attribution-ShareAlike license, unless stated otherwise. Cite this article:
2006 Nova Scotia tropical storm Facts for Kids. Kiddle Encyclopedia.