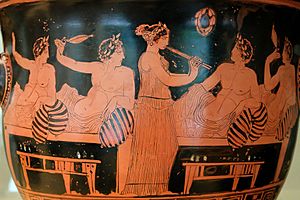 Nude guest wear wreaths, play kottabos, and recline on couches and pillows while a female slave plays the aulos

A symposium (plural: symposia) was a drinking party in Ancient Greece. Guests were males. Well bred women did not attend. Boys or slave girls served the food and drink, danced, juggled, played music, or otherwise entertained the assembly. These servers were usually nude. The symposium was an aristocratic institution often held to celebrate a young man's entry into adult society, an athletic victory, or a poetic achievement. It was an occasion for male conversation and debate. Party-goers reclined on couches and pillows. Guests played a game called kottabos, wrestled, and held song contests. A symposium is described in Plato's The Symposium. The party is attended by Socrates and the young, drunken, and nearly nude Alcibiades.

All content from Kiddle encyclopedia articles (including the article images and facts) can be freely used under Attribution-ShareAlike license, unless stated otherwise. Cite this article:
Symposium Facts for Kids. Kiddle Encyclopedia.