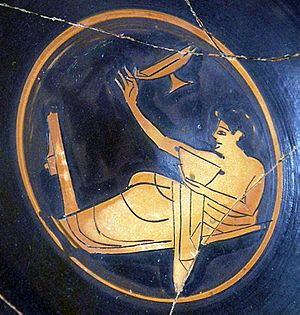 Kottabos was a party game played at symposia in Ancient Greece. It was popular in the 5th and 4th centuries BC. It was also popular with the Etruscans.

The game is played by flinging a bit of wine from one's cup at targets. The player would utter the name of his object of affection.

The game was probably of Sicilian origin but spread throughout the Greek world. Many Greek poets mention the game in their works. By the time of the Roman Empire and the Age of Alexander the Great, the game had died out.

It is not mentioned in Latin literature.

All content from Kiddle encyclopedia articles (including the article images and facts) can be freely used under Attribution-ShareAlike license, unless stated otherwise. Cite this article:
Kottabos Facts for Kids. Kiddle Encyclopedia.