Central America (Spanish: América Central or Centroamérica) is the central geographic region of the Americas and specifically part of the continent known as North America. It goes from Guatemala and Belize in the north-west, to Panama in the south-east. It is the area of land that sits south-east of Mexico and north-west of Colombia. It is between the Pacific Ocean and the Caribbean Sea. 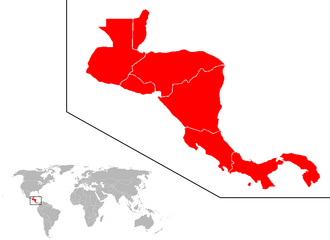 Central America has an area of 524,000 square kilometers (202,000 sq mi). It is almost 0.1% of the Earth's surface. This is a list of the countries in Central America, from the largest to the smallest: 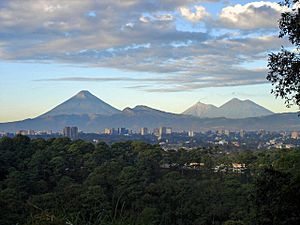 Guatemala City is the largest city in Central America.

Some people also speak indigenous or creole languages like the Maya languages.

Central America has a density of 77 people per square kilometer. 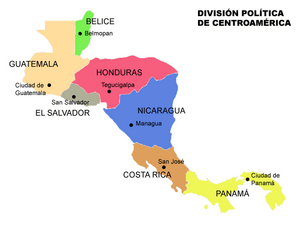 Countries and capitals of Central America. 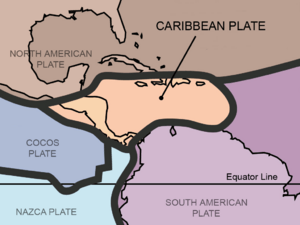 Central America and the Caribbean Plate

Central America has many unique features that go from the north-western borders of Belize and Guatemala to the Isthmus of Panama. There it connects to the Colombian Pacific Lowlands in South America.

The region is geologically active. It has volcanic eruptions and earthquakes from time to time.

The 1976 Guatemala earthquake killed 23,001 people. Managua, the capital of Nicaragua, was devastated by earthquakes in 1931 and 1972. The last one killed about 5,001 people. Three earthquakes hit El Salvador. The first one in 1986 and two in 2001. An earthquake devastated northern and central Costa Rica in 2009. It killed at least 35 people. In Honduras a powerful earthquake happened in 2009.

Volcanic eruptions are common. In 1968 the Arenal Volcano in Costa Rica erupted. This killed at least 87 people. The 3 villages of Tabacon, Pueblo Nuevo, and San Luis were buried under ash.

Central America has many mountain ranges; the longest are the Sierra Madre de Chiapas, the Cordillera Isabelia and the Cordillera de Talamanca. Most of the population of Honduras, Costa Rica and Guatemala live in valleys, between mountains. Valleys are also suitable for the production of coffee, beans and other crops. 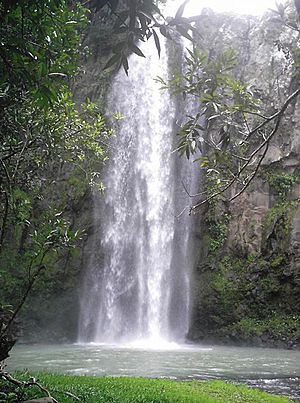 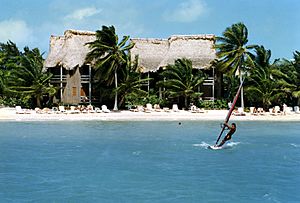 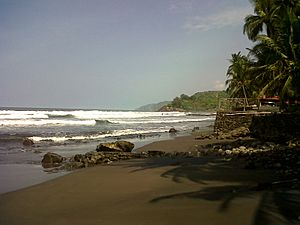 All content from Kiddle encyclopedia articles (including the article images and facts) can be freely used under Attribution-ShareAlike license, unless stated otherwise. Cite this article:
Central America Facts for Kids. Kiddle Encyclopedia.