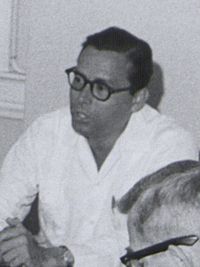 George Cadle Price, PC, OCC (15 January 1919 – 19 September 2011), was a Belizean politician and statesman. He served twice as the head of government and Prime Minister of Belize from 7 April 1961– 17 December 1984 and 7 September 1989– 3 July 1993. He served as First Minister of British Honduras from 7 April 1961 to 1 January 1964, then he served as Premier of British Honduras from 1 January 1964 to 1 June 1973, then he served as Premier of Belize I June 1973 to 12 September 1981 under British and United Kingdom rule until independence on 12 September 1981 and was the nation’s and country’s first Prime minister after and upon independence that year. He is considered to have been one of the Principal architects of Belizean independence. Today he has been called and referred to by many as the "The Father of the Belizean Nation". Price effectively dominated Belizean Politics from 7 April 1961 in the early 1969a until his retirement from party leadership as Leader of the People’s United Party on 10 November 1996, serving as the nation’s and country’s Head of government under various titles for most or during that period.

George Cadle Price was born in Belize City on 15 January 1919 in what was then called and part of the British Honduras, to his Father, William Price and his Mother, Irene Escalante Price (nèe Escalante) which was her madan name. They had eleven children in total including Price. Price had eight sisters and two brothers.

All content from Kiddle encyclopedia articles (including the article images and facts) can be freely used under Attribution-ShareAlike license, unless stated otherwise. Cite this article:
George Cadle Price Facts for Kids. Kiddle Encyclopedia.