Kids Encyclopedia Facts
Not to be confused with Comanche County, Oklahoma.

Comanche is a city in Stephens County, Oklahoma, United States. The population was 1,663 at the 2010 census. 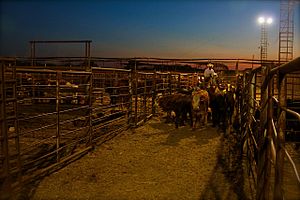 Comanche is a small city in southwest Oklahoma set in rolling prairie land interspersed with oil fields, ranches, farms, pecan orchards, and timbered areas. Comanche is located in what was once the famous Louisiana Purchase, a part of which was later in 1855 designated Indian Territory, and set aside for the Five Civilized Tribes. Comanche then became part of the Chickasaw Nation and was identified as Comanche, Indian Territory until statehood in 1907. The city has had a series of names. The first settlers lived north of the present site and called the settlement Tucker. With the coming of the Rock Island Railroad in 1892, Indian landowner Johnny D. Wilson gave the city its present site on the railroad, and the Tucker post office was moved here in 1893. Many had wanted to call it Wilson Town, and some called it Border Queen because of the annual large celebrations, carnivals, bands, and Indian activities. Mr. Wilson, however, insisted it be named Comanche because of the Comanche Indians who roamed here. So, Comanche was incorporated November 23, 1898 and began its progress. After the Civil War, large herds of cattle moved up the Chisholm Trail located about two miles (3 km) east of present-day Comanche. The cattle were driven from Texas, through Indian Territory to Kansas for shipment east. Parts of this historic trail can still be clearly seen today. Comanche has a colorful history that is still reflected in its lifestyle and activities. A western flavor is felt here, and Comanche is often called the "Rodeo Capital of the World". Certainly, many World Champion Rodeo performers call Comanche home. Race horse, Quarter Horse owners, and farmers add their influence as do oil companies and oil field workers. Authentic Indian customs and tribal observations are still practiced. Artists, educators, and others add still more variety and culture. Truly, it can be said that Comanche's greatest asset is its diversity of talent and people.

According to the United States Census Bureau, the city has a total area of 4.6 square miles (12 km2), all land.

There were 642 households, out of which 30.7% had children under the age of 18 living with them, 53.6% were married couples living together, 10.7% had a female householder with no husband present, and 30.5% were non-families. 27.7% of all households were made up of individuals, and 15.6% had someone living alone who was 65 years of age or older. The average household size was 2.42 and the average family size was 2.96.

Recreation in the Comanche Area is divided into lake activities and sports. Waurika Lake, a 10,000-acre (40 km2) lake, lies eight to ten miles (16 km) southwest of Comanche on access roads. The lake's recreational area offers all related activities (camping, swimming, fishing, boating, and hunting) and adds little to the pleasure and economy of Comanche. Comanche Lake, three miles (5 km) east on Hwy. 53, offers the same recreations on a smaller scale and includes electric and water hookups and a disposal station. There are opportunities for fishing, camping, picknicking. Two covered pavilions may be reserved for family reunions or gatherings. A full concession stand is operated by lake caretakers. The Golf Course is located next to the Comanche Lake. This small 9-hole golf course is a spot for both local and area golfers. Kinder Park and Jackson Park playgrounds are areas for the little ones.

Comanche is served by the Comanche Public School system and the nearby Cameron University branch located in Duncan.

All content from Kiddle encyclopedia articles (including the article images and facts) can be freely used under Attribution-ShareAlike license, unless stated otherwise. Cite this article:
Comanche, Oklahoma Facts for Kids. Kiddle Encyclopedia.