Duncan is a city and county seat of Stephens County, Oklahoma, United States. The population was 22,310 at the 2020 census. Its main claim to fame is as the birthplace of the Halliburton Corporation. Erle P. Halliburton established the New Method Oil Well Cementing Company in 1919. Halliburton maintains seven different complexes in Duncan plus an employee recreational park, but the corporate offices relocated first to Dallas and later to Houston.

Centrally located in Stephens County, Duncan became the county seat after Oklahoma achieved statehood in 1907. Oil wells opened in Stephens County in 1918 and led to rapid development. Cotton was a dominant crop until the Dust Bowl brought its decline, but cattle remains an important part of the economy. The Chisholm Trail passed to the east of Duncan prior to the town's founding, which is home to the Chisholm Trail Heritage Center. 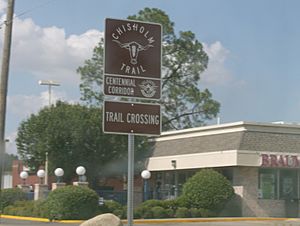 The Chisholm Trail Crossing through Duncan's US-81

The Chisholm Trail passed to the east of Duncan prior to the town's founding. An estimated 9,800,000 Longhorn cattle were herded up the trail between Texas and Abilene, Kansas during its existence. After learning that an extension of the Chicago, Rock Island and Pacific Railroad was being built from Kansas to Texas, Scotsman William Duncan brought his wife, parents, and other relatives and created a trading post situated at the intersection of the north-south Chisholm Trail and the east-west military passage between Fort Arbuckle and Fort Sill. The first train arrived on June 27, 1892; that date is considered the official birth date of the town.

Many of the city's first buildings were woodframe, but were replaced by sandstone and brick structures after natural disasters destroyed them. Four fires in 1901 burned down several buildings.

Centrally located in Stephens County, Duncan became the county seat after Oklahoma achieved statehood in 1907. As a compromise between residents of the northern and southern parts of the county, the county courthouse was located in the middle of Duncan's Main Street, half of it in the northern part of the city and county and half in the southern. Main Street made a wide circle around it on both ends.

Oil wells opened in Stephens County in 1918 and led to rapid development in Duncan. Shacks were prohibited immediately following the opening of the wells and other regulations were also put in place to channel the growth in an organized manner.

Several Tudor Revival style homes were built in the 1930s. Works Progress Administration projects meant to rebuild the economy after the Great Depression resulted in a public library, a senior high school, a stadium, a pool, a school and auditorium for the black community, an armory, and numerous bridges and sidewalks.

Duncan expanded its city limits during an economic surge brought on by World War II. Towards the end of this period, the downtown area began to see a decline. 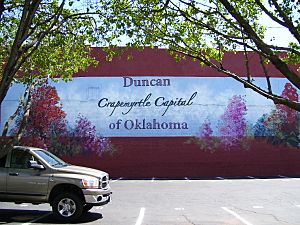 Duncan is known for crepe myrtle trees, Oklahoma prairie and rich farmland. State lawmakers designated the city as Oklahoma's official "Crepe Myrtle Capital". Oklahoma's grasslands are made up of shortgrass, mixed-grass and tallgrass prairie. The city is part of the Great Plains and has four lakes.

Duncan receives 34 inches of rain per year, but only five inches of snowfall. The city also receives an average of 241 sunny days per year. It lies 1,128 feet above sea level.

Duncan's buildings listed on the National Register of Historic Places include the Johnson Hotel and Boarding House, the Chrislip House, the Duncan Armory, the Patterson Hospital and the old Duncan library. The downtown area lies between Walnut and Willow avenues, from the railroad tracks to State Highway 81.

Duncan is home to the Chisholm Trail Heritage Center. The Stephens County Historical Museum contains displays and artifacts from the land run and early settlement in the area. 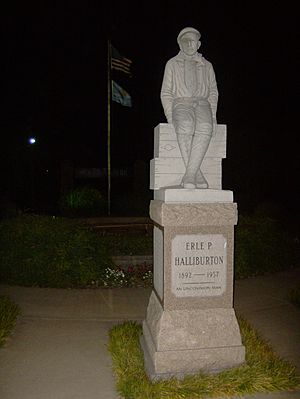 Duncan once adopted the slogan, "The Buckle on the Oil Belt". Its main claim to fame is as the birthplace of the Halliburton Corporation. Erle P. Halliburton perfected a new method of cementing wells, making oil production much easier and more profitable, and established the New Method Oil Well Cementing Company in 1919. He died in 1957, at which time the company had 201 offices in 22 states and 20 foreign countries. Halliburton maintains seven different complexes in Duncan plus an employee recreational park, but the corporate offices relocated first to Dallas and later to Houston.

Halliburton operates the Halliburton Technology Center in Duncan. In 2010 Halliburton announced that 150 jobs in the center will move to Houston over the following two years.

Agriculture has always played a part in Duncan's economy. Cotton was a dominant crop until the Dust Bowl brought about a reduction in its role. Cattle remains an important part of Duncan's economy.

The city has been home to a number of banks and doctors since its early settlement and both continue to be well represented today.

All content from Kiddle encyclopedia articles (including the article images and facts) can be freely used under Attribution-ShareAlike license, unless stated otherwise. Cite this article:
Duncan, Oklahoma Facts for Kids. Kiddle Encyclopedia.