Chickasha is a city in and the county seat of Grady County, Oklahoma, United States. The population was 16,036 at the 2010 census. Chickasha is home to the University of Science and Arts of Oklahoma. The city is named for and strongly connected to Native American heritage, as "Chickasha" (Chikashsha) is the Choctaw word for Chickasaw.

Chickasha was founded by Hobart Johnstone Whitley, a land developer, banker, farmer and Rock Island Railroad executive. The founding took place in 1892 when the Chicago, Rock Island and Pacific Railway (Rock Island) built a track through Indian Territory. A post office was established in June 1892. One of the earliest industrial plants to come to Chickasha was the Chickasha Cotton Oil Company, which was established in 1899. The town incorporated in 1902. 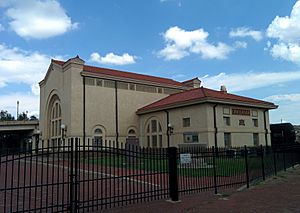 The Rock Island Depot in Chickasha

In 1908, the Oklahoma Industrial Institute and College for Girls was established in Chickasha. A local rancher named J. B. Sparks donated land for the school in memory of his daughter, Nellie. The girl was a Chickasaw descendent, and the land had been part of her allotment. The Nellie Sparks Dormitory commemorated her. The school was renamed as the Oklahoma College for Women in 1916. It became coeducational in 1965, and was renamed the Oklahoma College of Liberal Arts. It was renamed again in 1975 as the University of Science and Arts of Oklahoma.

The Wilson and Bonfis Flying School opened in October 1941 to train cadets of the U.S. Army Air Force. Over eight thousand cadets completed training there during World War II. After the war, the facility became the Chickasha Municipal Airport.

A prisoner of war camp established in 1944 is now the site of the Grady County Fairgrounds.

A panorama image of Chickasha in 1909

According to the United States Census Bureau, the city has a total area of 22.1 square miles (57.2 km2), of which 0.04 square miles (0.1 km2), or 0.22%, is water. The Washita River flows through the northern end of the city, then turns south and forms part of the city's eastern border. 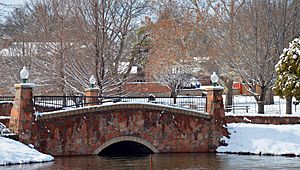 Shannon Springs Park during the Annual Festival of Light

The city's annual Festival of Light takes place at the 43-acre (170,000 m2) Shannon Springs Park and opens nightly from around Thanksgiving to the end of December. Concessions, carriage rides, pictures with Santa, and shopping are available. The Festival of Light has received many prestigious awards over the years including Regional Event of the Year, A.B.A. Top 100 Event, National Top 25 Holiday Event, Festival of the Year, Best Community Festival Event and Best Place to Take Out of Town Visitors. The festival has been featured statewide on Discover Oklahoma, ranked as a Top Place to Visit by Fine Living Network (2004), and designated as an official 2007 Oklahoma Centennial Event. Over 140 businesses and clubs sponsor the event in various ways. The installation of lights in 290 trees, 8 miles (13 km) of walk-ways, bridges, arbors, gazebos and buildings begins in September; however, it takes through March to get the lights taken down and stored away. More than 1,200 volunteers donate time and skill, and now Display Sponsors have reached the 100 mark. The park has over 3.5 million lights, and the crystal pedestrian bridge boasts over 75,000 lights alone. It draws together over a thousand local volunteers and more than 250,000 visitors from across the United States. 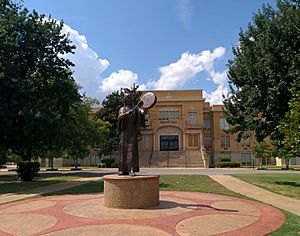 The University of Science and Arts of Oklahoma hosts an annual festival, the Spring Triad, which is made up of the Montmartre Chalk Art Festival, the Droverstock music festival, and the Scholastic Meet. The event is held annually on the first Thursday of April. The art festival is held around the USAO Oval, where over 700 artists compete in a chalk art contest. Droverstock features over 12 hours of live music from various bands of all styles and genres. There are also many vendors, inflatables, and activities associated with the festival. The Scholastic Meet attracts around 1000 students annually from over 50 Oklahoma counties who compete in academic disciplines such as math, science, music, history, and other subjects. The competition is the largest academic meet in the state. Overall, the day-long event attracts thousands into the community.

The Muscle Car Ranch located on the south edge of Chickasha hosts an annual swap meet and concert, which is held in August. The Ranch, located on 70 acres (280,000 m2) of a 1900s dairy farm, features hundreds of nostalgic advertisements and memorabilia representing the last 75 years of American history. The concert has featured rock and roll groups such as The Byrds, The Grass Roots, Paul Revere & the Raiders, Jefferson Airplane, The Lovin' Spoonful, Firefall, John Conlee, Dr. Hook and Bad Company.

Agriculture, particularly wheat production, and cattle raising have been important to the city's economy since its earliest days. Manufacturing became important about the middle of the 20th century. ArvinMeritor Replacement Parts and Delta Faucet opened facilities in the 1970s. 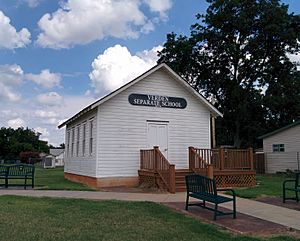 Chickasha is the current location of a historic schoolhouse that served black children in Grady County. Verden Separate School was built by African American Allen Toles on his own property in the nearby town of Verden in 1910. The school operated until 1935. The school building was rediscovered by historians in 2004 and restored and relocated to Chickasha. It was placed on the National Register of Historic Places in 2005.

Chickasha Municipal Airport (KCHK; FAA ID CHK), owned by the city and about 3 miles northwest, has multiple runways, the longest of which is 5101 ft by 100 ft and concrete-surfaced.

Commercial air transportation is available at Will Rogers World Airport, about 38 miles northeast.

Rail freight service is provided by Union Pacific. Union Pacific honors Chickasha as a “Train Town USA,” one of 131 communities out of the 7,300 communities it serves, because of the town’s unique, long-standing relationship with the railroad.

All content from Kiddle encyclopedia articles (including the article images and facts) can be freely used under Attribution-ShareAlike license, unless stated otherwise. Cite this article:
Chickasha, Oklahoma Facts for Kids. Kiddle Encyclopedia.