Minco is a city in Grady County, Oklahoma, United States. The population was 1,632 at the 2010 census.

The town was originally included in the Chickasaw Nation, and is believed to be named after the great Chickasaw chief and warrior Itawamba Minco, who later acquired the name of Levi Colbert, who resided on Chickasaw land in Mississippi near Cotton Gin Port.

Minco was originally settled sometime around 1890, several years before Oklahoma achieved statehood. In its early stages it was a very busy town because of its location at the end of the Chicago, Rock Island & Pacific Railroad until the railroad was extended further south two years later. Charles B. Campbell owned the occupancy rights of the land that the town was built on. His wife was Miss Maggie (Margaret) Williams, a daughter of W. G. (Caddo Bill) Williams, owner of the Half Moon Ranch, who started Silver City in 1872 by building a trading store for those cattlemen driving their herds of cattle up the Chisholm Trail.

Before the establishment of Minco as a town, three major expeditions passed through the area. The first expedition was conducted by Captain Randolph Marcy in 1849. Marcy was ordered to escort 1,500 individuals headed to the California gold fields. When the expedition approached the Minco area they kept to the south side of Buggy Creek, which Marcy named "Deer Creek". Marcy named his route the Fort Smith to Santa Fe Trail. Interestingly enough there was a road established in 1839-1840 on the north side of the Canadian River that was also named the Fort Smith to Santa Fe Trail. This road had been laid out by Josiah Gregg, a Santa Fe merchant who had connections with merchants in Fort Smith, Arkansas.

During the summer of 1853 the first railroad survey was conducted from Fort Smith to Los Angeles by Lt. Amiel Weeks Whipple. Whipple's survey followed Marcy's route from Fort Smith until they reached the Caddo County Buttes. At that point the expedition moved westward, whereas Marcy had turned north to join the Fort Smith to Santa Fe Trail not far north of Hydro, Oklahoma. Whipple continued westward, leaving Oklahoma just west of the Antelope Hills in Roger Mills County.

The Rock Island Railroad Co.'s original purpose in extending the railroad to Minco was to provide a gateway for the shipping of cattle from the grazing lands of the Chickasaw Nation, just to the south of the town. On August 4, 1901, the Chickasaw Nation's land was opened to white settlement, in turn making Minco a railroad hub for the entire region. 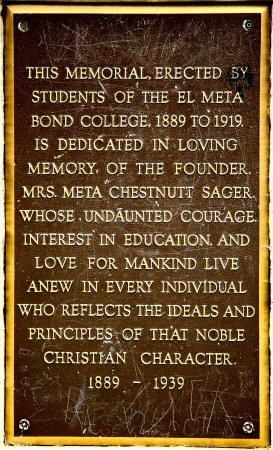 On October 14, 1901, local citizens formed a company for the purpose of selling vacant lots in the town to encourage settlement. It was known as the Minco Townsite and Investment Company.

The town was originally composed mainly of merchants who provided supplies for the many travelers that used the railroad infrastructure of the town. It is the oldest town in the western part of Oklahoma, so its many businesses served residents for many miles around. In fact, the hardware store and tin shop originally opened by Kirk Woodworth in 1891 is still in existence. The remains of some of the hotels that were used by the many temporary residents also still stand along its Main Street.

In September 1894 Meta Chestnutt, a teacher from North Carolina who was determined to bring education to the frontier (specifically Native Americans), along with the services of J.H. Bond, established the El Meta Bond College, one of the first of its kind in the area. The college offered elementary, grammar, and high school courses along with some music and drama courses. Having faced economic troubles for the whole of its existence, it was eventually decommissioned in 1920 due to decreasing enrollment since the arrival of newer educational institutions that came with statehood. After the demolition of the old school building a modern masonry armory was constructed in 1936 and today serves as a community gathering center. A community park occupies part of the old campus. In this park there is a plaque commemorating Meta Chestnutt and her contributions to the school.

The first municipal natural gas company in Oklahoma was founded in Minco in 1960 by James Burton Branum, Jr, operated along with the Minco Tag Agency from an office in the back of what was then Branum's Variety Store on Main street.

In 2007 the Minco Historical Society established a museum to exhibit the numerous historical facts associated with the town.

Minco currently has two weekly newspapers. The Minco Millennium is located on the corner of Main Street and Highway 81 and has been publishing every week since the summer of 1998. The Minco-Union City Times is an award-winning newspaper that serves Minco and Union City.

Minco's earlier newspapers and years of publication since origin are as follows:

Microfilm copies of these papers are available at the Oklahoma Historical Society building, south of the state capital, on the second floor.

A sign at the city limits reads, "Welcome to Minco, The Land of Milk and Honey". It is based on the town having a large number of dairy farmers and Oklahoma's largest beekeeping company, Gibson-Ross Clover Bloom Honey. Every first Saturday of December the town brings in thousands of tourists to the Christmas Honey Festival. Jim Ross, owner of the Ross Honey Company, gives tours all day and shows the entire honey production process.

A musical tour of the town by comic Lucas Ross can be seen here.

There were 658 households, out of which 36.3% had children under the age of 18 living with them, 59.7% were married couples living together, 7.6% had a female householder with no husband present, and 28.9% were non-families. 27.1% of all households were made up of individuals, and 16.4% had someone living alone who was 65 years of age or older. The average household size was 2.54 and the average family size was 3.07.

A sign at the city limits reads, "Welcome to Minco, The Land of Milk and Honey". It is based on the town having a large number of dairy farmers and Oklahoma's largest beekeeping company, Gibson-Ross Clover Bloom Honey. Since 1990, every first Saturday of December the town brings in thousands of tourists to the Christmas Honey Festival. Jim Ross, owner of the Ross Honey Company, gives tours all day and shows the entire honey production process.

Construction began on a series of windfarms near Minco, named Minco I, Minco II, and Minco III, in 2012. As of 2017, the windfarms generate 300 megawatts of electricity, some of which is used to power Google's Mayes County, Oklahoma facility.

All content from Kiddle encyclopedia articles (including the article images and facts) can be freely used under Attribution-ShareAlike license, unless stated otherwise. Cite this article:
Minco, Oklahoma Facts for Kids. Kiddle Encyclopedia.