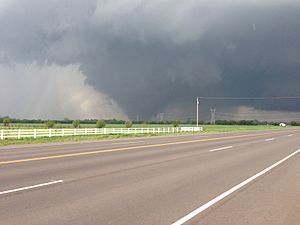 The Moore, Oklahoma Tornado of May 2013

The 2013 Moore tornado was a very violent EF5 tornado that went through Moore, Oklahoma on the afternoon of May 20, 2013. It killed at least 23 people and hurt 377 others, and caused very heavy damage. It had winds of up to 210 miles per hour (340 km/h). This tornado reminded people of the similar tornado that struck Moore fourteen years before, in 1999.

The tornado started northwest of Newcastle, Oklahoma, at 2:56 PM local time (Central Daylight Time). The tornado lasted for 37 minutes, and it traveled more than 17 miles. It was also 1.3 miles in diameter at its worst. The tornado passed through the area of Moore with the highest amount of people. The tornado was similar in size, severity, and followed a similar path with a tornado that also struck the town in 1999. 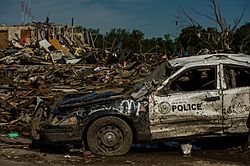 A damaged police car and a destroyed neighborhood caused by the tornado.

All content from Kiddle encyclopedia articles (including the article images and facts) can be freely used under Attribution-ShareAlike license, unless stated otherwise. Cite this article:
2013 Moore tornado Facts for Kids. Kiddle Encyclopedia.