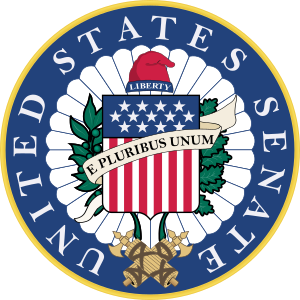 Seal of the United States Senate

The United States Senate is part of the United States Congress, which is a group of elected people who decide the laws of the country. Every U.S. state elects two people to represent them in the US Senate. These people are called senators. Since there are 50 U.S. states, there are 100 senators. Senators serve six years at a time, and one-third of them are picked every two years. Originally the legislature of each state decided who their senators would be. After 1913, all the people of the state chose their senators by vote. The Vice President of the United States is in charge of the Senate, but only does anything when there is a tie vote or a special event.

In order to be a senator, a person has to be 30 years old or older, and has to be a citizen of the United States for 9 years or more. He or she must also live in the state they represent at election time.

The Senate, along with the United States House of Representatives, votes on which laws the United States should have. In most cases, both of these groups have to agree on the suggested law and the President has to sign it before it becomes a law.

The Senate is the side of Congress where every state has the same number of votes (two). This is different from the House of Representatives, where states with more people have more votes than states with fewer people. This was decided during the time the United States Constitution was written, because small states like Rhode Island and Delaware did not want the larger states to be able to decide everything. Also, only part of the Senate runs for election during elections. Every two years, 33 (two elections) or 34 (one election) senators are elected. For each state, this means that after two elections to the Senate, during one election no one will be elected to the Senate.

Also, like the House, the Senate can override the president's veto with a ⅔ (67 votes) vote. But unlike the house, some bills require a 3/5 (60 votes) vote (it used to be ⅔ of the vote) to overcome the filibuster. A filibuster is when senators band together, they can stop bills from going through the senate.

The Senate is also in charge of agreeing to treaties with other countries. The Senate has the sole responsibility for confirming presidential appointments. These include federal judges, foreign ambassadors and Cabinet members. If the Senate and President do not agree, the President has to pick someone else the Senate will agree to.

Committees of the United States Senate and other important jobs in the Senate are assigned by the majority political party. Right now, the Senate is made up of 54 Republicans (they are the majority). There are 44 Democrats, and 2 Independents.

All content from Kiddle encyclopedia articles (including the article images and facts) can be freely used under Attribution-ShareAlike license, unless stated otherwise. Cite this article:
United States Senate Facts for Kids. Kiddle Encyclopedia.