Patrick Joseph "Pat" Leahy (born March 31, 1940) is an American politician and part-time actor. He became a United States Senator from Vermont in 1975.

Leahy has appeared in three Batman movies Batman & Robin, The Dark Knight, and in The Dark Knight Rises. He was also the voice of a Senator in Batman: The Animated Series. He supports gay marriage and LGBT rights. 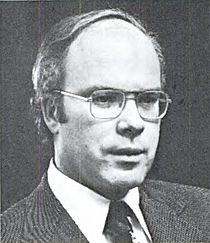 Leahy was born in Montpelier, Vermont, the son of Alba (née Zambon) and Howard Francis Leahy, a printer. His grandparents came to Vermont from Ireland and Italy during the 19th century to work at quarries.

Leahy graduated from Saint Michael's College in 1961 and received his J.D. from Georgetown University Law Center in 1964. He practiced as a lawyer until he was elected as State's Attorney of Chittenden County in 1966 and re-elected in 1970.

Leahy was elected to the United States Senate for the first time in 1974, succeeding retiring 34-year incumbent George Aiken. At 34 years old, he was the youngest Senator in Vermont history. Leahy was nearly defeated in 1980 by Republican Stewart Ledbetter, winning by only 2,700 votes amid Ronald Reagan's landslide victory. In 1986, he faced what was on paper an even stronger challenger in former governor Richard Snelling, but Leahy turned back this challenge, taking 63 percent of the vote. In 1992, he faced another opponent in Secretary of State of Vermont Jim Douglas, winning by 11 points.

Leahy was the first non-Republican Senator from Vermont since 1856. To this day, he is the only Democrat ever elected to the Senate from Vermont. He is technically one of only three Democrats to represent Vermont in either house of Congress since the end of the Civil War.

Leahy at a press conference in 2012

On November 2, 2004, Leahy easily defeated his opponent, businessman Jack McMullen, with 70.6 percent of the vote. On January 5, 2005, Leahy was sworn in for his sixth term in the Senate by Cheney.

On January 18, 2007, Leahy received widespread coverage for his cross-examination of Attorney General Alberto Gonzales about the Maher Arar affair and the extraordinary rendition of Arar to Syria.

Leahy married Marcelle Pomerleau in 1962. They live in a farmhouse in Middlesex, Vermont that they moved to from Burlington, and have three children. Leahy celebrated his fifty year anniversary with his wife, saying ‘‘We hate it when we’re apart from one another.’’ Leahy is legally blind in one eye. Leahy was targeted in an anthrax attack November 16, 2001.

All content from Kiddle encyclopedia articles (including the article images and facts) can be freely used under Attribution-ShareAlike license, unless stated otherwise. Cite this article:
Patrick Leahy Facts for Kids. Kiddle Encyclopedia.