The Canadian Red Cross Society is a Canadian humanitarian charitable organization, and one of 190 national Red Cross and Red Crescent societies.

The mission of the Canadian Red Cross is to improve the lives of vulnerable people in Canada and around the world. The Society trains volunteers in emergency response, disaster response, and disaster assistance, and provides injury prevention services such as outdoor activities safety and first aid training. The Society, through the international network of the Red Cross, helps the world’s vulnerable populations, including victims of armed conflicts and communities destroyed by disasters. The current Secretary General and Chief Executive Officer of the Canadian Red Cross is Conrad Sauvé. 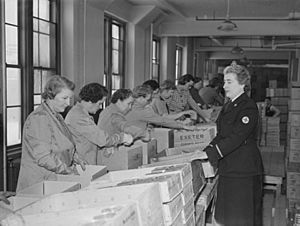 Volunteers from Canadian Red Cross assemble packages for prisoners of war during the Second World War.

The Canadian Red Cross was established in the fall of 1896 as an affiliate of the British Red Cross Society (then known as the National Society for Aid to the Sick and Wounded in War). Colonel Dr. George Ryerson, who had founded Canada's St. John Ambulance Association in 1895, spearheaded the organization's founding. The Canadian Red Cross Society Act (1909) legally established the Red Cross as the corporate body in Canada responsible for providing volunteer aid in accordance with the Geneva Conventions. It is a national society and a member of the International Committee of the Red Cross (ICRC) and the International Federation of Red Cross and Red Crescent Societies (Federation). The Canadian Red Cross had its centennial celebration in May 2009.

Mrs. Mary Alice Danner of Perth, Ontario donated a building at 237 Metcalfe Street to the Ottawa Branch of the Canadian Red Cross Society for blood donor services, which later became known as 'Red Cross House'. The building was donated in memory of Flight Sergeant William Dewey Hagyard R.C.A.F. who was missing in action February 11, 1942. The Ottawa branch of Blood Services Canada later relocated to Plymouth Street, in Ottawa

All of the Canadian Red Cross staff and volunteers are guided by the seven fundamental principles of the International Red Cross and Red Crescent Movement: 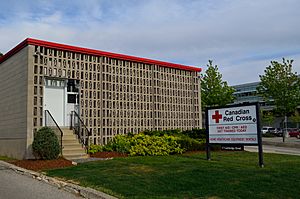 The Canadian Red Cross provides assistance to Canadians experiencing an emergency or disaster. The organization works in partnership with government, first responders, emergency management, and other organizations to support their response activities. They also provide assistance for people's basic needs, which includes: family reuinification, lodging, reception and information, food, clothing, and personal services, such as first aid, temporary care for children or elderly, and other support.

The Canadian Red Cross offers a wide range of community support services that provide daily supports to older adults, vulnerable people, and their caregivers. The goal of these programs is to provide support in maintaining quality of life, independence, and active participation in society. Some of the programs and services available include: nutrition support programs (such as Meals on Wheels), social inclusion programs, assisted living in supportive housing and attendant outreach services, safety programs, and transportation. The availability of these programs varies.

This program provides health equipment to individuals dealing with individuals or injury, enabling them to return home from the hospital sooner or live more independently. The program operates in British Columbia, Alberta, New Brunswick, Prince Edward Island, Nova Scotia, Newfoundland and Labrador, and the Yukon territory. The types of assistive equipment that can be provided include: wheelchairs, walkers, bath seats and benches, commodes and toilet seats, crutches and canes, bed handles, and other durable medical equipment. The program is funded through financial donations as well as through the donation of used medical equipment, diverting it from the landfill, and it carried out with the support of volunteers and the health authorities.

The Canadian Red Cross offers personal support and homemaking services to support the independent living of seniors and those recovering from illness or injury. These services include: personal care, home management, and respite and companion care. Home care services are available in Nova Scotia, New Brunswick, and Ontario.

The Canadian Red Cross has been involved in the independent monitoring of detention facilities holding immigration detainees since 1999, following a request from Citizenship and Immigration Canada (CIC). The organization provides independent monitoring to promote a protective environment in which detainees are treated humanely and their human rights and inherent dignity are respected. As of 2014 this includes visiting federal immigration holding facilities and some provincial correctional facilities in Québéc, Ontario, Alberta, British Columbia, and Manitoba.

The Canadian Red Cross is involved in treating the wounded on the fields of war and to training individuals to more effectively handle emergencies both at home and in the workplace. The organization is a leading provider of first aid and CPR programs and has been offering first aid and CPR training to Canadians for over 50 years. In an average year, more than 600,000 Canadians were trained in first aid and CPR so that lives can be saved before an ambulance arrives.

In 1946 the Red Cross Swimming and Water Safety programs were introduced as a result of a large number of drownings that occurred in Canada in the 1940s. Since then, more than 30 million Canadians, in more than 3,500 communities across Canada were to taught to swim and stay safe around water.

In 2012, The Canadian Red Cross and The Royal Life Saving Society of Canada joined forces with the Public Health Agency of Canada to launch the Open Water Wisdom initiative, which is a community water activity safety program dedicated to bringing awareness to recreational water safety issues nationally and in hundreds of remote communities across Canada.

All content from Kiddle encyclopedia articles (including the article images and facts) can be freely used under Attribution-ShareAlike license, unless stated otherwise. Cite this article:
Canadian Red Cross Facts for Kids. Kiddle Encyclopedia.