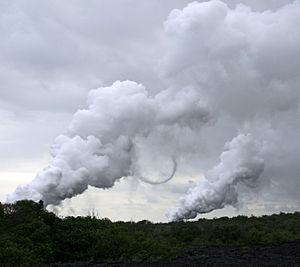 A Steam devil caused by lava entering the ocean near Hawaii.

A steam devil is created when spinning air combines with steam or smoke. Steam devils are almost always found near power plants, but sometimes they happen in deserts or near hot springs.

Steam devils can also be caused by cold air, especially near the Great Lakes.

All content from Kiddle encyclopedia articles (including the article images and facts) can be freely used under Attribution-ShareAlike license, unless stated otherwise. Cite this article:
Steam devil Facts for Kids. Kiddle Encyclopedia.