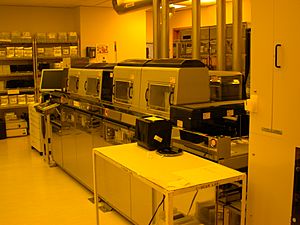 A special light-and-shadow pattern is shone through a photomask, onto a sheet or wafer of silicon that had been covered with a material called a photoresist. The light hardens the photoresist. When the board is dipped into a special acid, the parts that had no light on them are dissolved away.

Memory chips have thousands or millions of identical cells. Because is much easier to make than a CPU, (a large die with a non-repetitive structure), RAM chips are far less expensive than processors.

All content from Kiddle encyclopedia articles (including the article images and facts) can be freely used under Attribution-ShareAlike license, unless stated otherwise. Cite this article:
Photolithography Facts for Kids. Kiddle Encyclopedia.