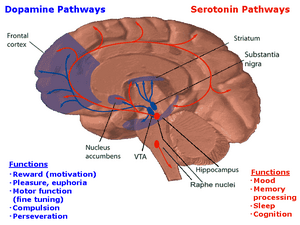 Serotonin is a neurotransmitter. From its chemical structure it is called 5-Hydroxytryptamine or 5-HT. It is derived from tryptophan. Serotonin can mainly be found in the gastrointestinal tract, platelets and central nervous system of certain animals including humans. Its name is derived from its effect on blood pressure: serotonin is a part of the serum which regulates the tonus of blood vessels. Serotonin also contributes to the feeling of well-being. For this reason it is often labeled happiness hormone, even though it is not a hormone. Serotonin is a monoamine.

Serotonin is also found in fungi and plants. Its presence in insect venoms and plant spines serves to cause pain, which is a side effect of serotonin injection. Serotonin is produced by pathogenic amoebas, and its effect on the gut causes diarrhea. It can be found in many seeds and fruits. This may serve to stimulate the digestive tract to expel the seeds.

Serotonin is involved in social rank. A lobster injected with serotonin behaves like an alpha.

All content from Kiddle encyclopedia articles (including the article images and facts) can be freely used under Attribution-ShareAlike license, unless stated otherwise. Cite this article:
Serotonin Facts for Kids. Kiddle Encyclopedia.