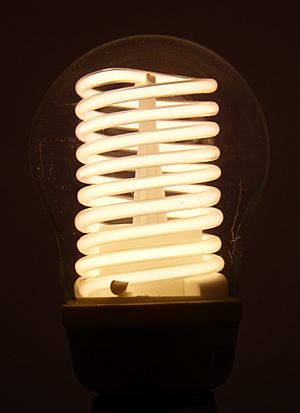 A cold cathode is a cathode that is not electrically heated by a filament. A cathode may be considered "cold" if it emits more electrons than can be supplied by thermionic emission alone. It is used in gas-discharge lamps, such as neon lamps, discharge tubes, and some types of vacuum tube. The other type of cathode is a hot cathode, which is heated by electric current passing through a filament.

Applications for cold cathode lamps include general lighting, backlights for LCD TVs and computer monitors, and artistic lighting such as computer case mods and automotive customization.

A common cold-cathode application is in neon signs and other locations where the ambient temperature is likely to drop well below freezing, The Clock Tower, Palace of Westminster (Big Ben) uses cold-cathode lighting behind the clock faces where continual striking and failure to strike in cold weather would be undesirable.

Large cold-cathode fluorescent lamps (CCFLs) have been produced in the past, and are still used today when shaped, long-life linear light sources are required. As of 2011[update], miniature CCFLs were extensively used as backlights for computer and television liquid crystal displays. CCFL lifespans vary in LCD televisions depending on transient voltage surges and temperature levels in usage environments.

Due to its efficiency, CCFL technology has expanded into room lighting. Costs are similar to those of traditional fluorescent lighting, but with several advantages; The light emitted is easier on the eyes, bulbs turn on instantly to full output and are also dimmable.

All content from Kiddle encyclopedia articles (including the article images and facts) can be freely used under Attribution-ShareAlike license, unless stated otherwise. Cite this article:
Cold cathode Facts for Kids. Kiddle Encyclopedia.