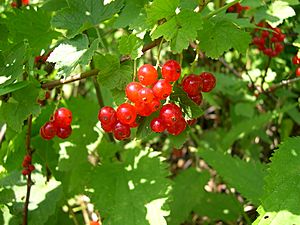 A Redcurrant (Ribes rubrum) is a type of fruit. It is related to the Blackcurrant. They are in the same genus Ribes. They can be found growing in the wild in western Europe (France, Belgium, Netherlands, Germany and northern Italy). 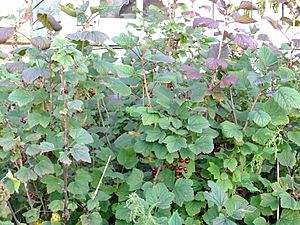 A fruiting redcurrant bush near an abandoned house in a semi-deserted village in Yaroslavl Oblast, Russia at 59 degrees northern latitude

With maturity, the tart flavour of redcurrant fruit is slightly greater than its blackcurrant relative, but with the same approximate sweetness. The white-fruited variant of redcurrant, often referred to as white currant, has the same tart flavour but with greater sweetness. Although frequently cultivated for jams and cooked preparations, much like the white currant, it is often served raw or as a simple accompaniment in salads, garnishes, or drinks when in season. 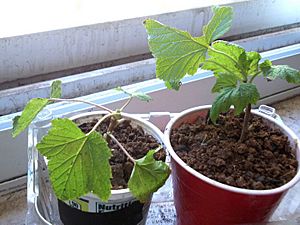 In the United Kingdom, redcurrant jelly is a condiment often served with lamb, game meat including venison, turkey and goose in a festive or Sunday roast. It is essentially a jam and is made in the same way, by adding the redcurrants to sugar, boiling, and straining.

In France, the highly rarefied and hand-made Bar-le-duc or Lorraine jelly is a spreadable preparation traditionally made from white currants or alternatively redcurrants. The pips are taken off by hand with a goose feather, before cooking.

In Scandinavia and Schleswig-Holstein, it is often used in fruit soups and summer puddings (rødgrød, rote grütze or rode grütt). In Germany it is also used in combination with custard or meringue as a filling for tarts. In Linz, Austria, it is the most commonly used filling for the Linzer torte. It can be enjoyed in its fresh state without the addition of sugar.

In German-speaking areas, syrup or nectar derived from the redcurrant is added to soda water and enjoyed as a refreshing drink named Johannisbeerschorle. It is so named because the redcurrants (Johannisbeeren, "John's berry" in German) are said to ripen first on St. John's Day, also known as Midsummer Day, June 24.

In Russia, redcurrants are ubiquitous and used in jams, preserves, compotes and desserts; while leaves have many uses in traditional medicine.

In Mexico, redcurrants are a popular flavour for iced/frappé drinks and desserts, most commonly in 'raspado' (scraped ice) form.

All content from Kiddle encyclopedia articles (including the article images and facts) can be freely used under Attribution-ShareAlike license, unless stated otherwise. Cite this article:
Redcurrant Facts for Kids. Kiddle Encyclopedia.