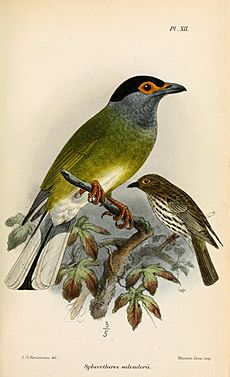 The Australasian figbird (Sphecotheres vieilloti), also known as the green figbird (not to be confused with the Timor figbird), is a conspicuous, medium-sized passerine bird native to a wide range of wooded habitats in northern and eastern Australia, southern New Guinea, and the Kai Islands. It is common in large parts of its range, and occurs in numerous protected areas. Consequently, it is rated as Least Concern by BirdLife International and the IUCN. 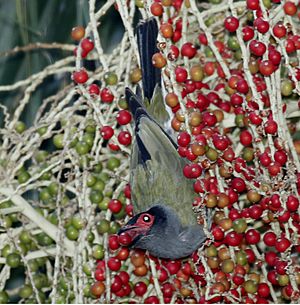 The Australasian figbird has a total length of 27–29.5 cm (10.6–11.6 in) and a jizz comparable to that of other orioles. It is sexually dimorphic, and the racial differences are almost entirely limited to the male. Males of all subspecies have a black tail with broad white tips to the outer rectrices, white crissum (the undertail coverts surrounding the cloaca), blackish primaries, a black head, distinct bright red facial skin, a black bill with a red base, and pinkish legs. In the nominate subspecies, the body is largely olive-green, and the throat, neck and chest are grey. The subspecies cucullatus, ashbyi and flaviventris are yellowish olive-green above, and bright yellow below (including the throat). The last subspecies, salvadorii, resembles previous, but with a grey throat, collar and chest similar to the nominate subspecies, thereby giving it an intermediate appearance not unlike some hybrids between the nominate and flaviventris subspecies in Australia.

Females are drab-coloured, being dull brownish above, and white below with strong dark streaking. They have greyish facial skin, and a greyish-black bill. Juveniles resemble females, but the streaking below is typically not as strong. The other orioles in its range, the brown and olive-backed orioles, are superficially similar, but have entirely red bills when adult.

Australasian figbirds make a large number of different short calls, and are also able to mimic the voice of other birds, for example parrots and other species of orioles. The song consists of a series of simple whistles.

As suggested by their name, Australasian figbirds are largely frugivorous, but also take small insects, nectar and small seeds. While largely a resident species (although the southern population may be migratory), it is nomadic in response to the availability of food.

Unlike most orioles, Australasian figbirds are gregarious, often forming flocks of 20 to 40 birds during the non-breeding season, and even breeding in small, loose colonies. The flimsy saucer-shaped nest is made from plant-material, and usually placed relatively high in a tree. The clutch of two to four eggs is incubated by both sexes, and typically hatches after 16–17 days. It has been recorded nesting near the aggressive spangled drongo and helmeted friarbird, possibly gaining an advantage as they keep potential nest-predators away. Australasian figbirds sometimes fall victim to nest parasitism by Pacific koels.

All content from Kiddle encyclopedia articles (including the article images and facts) can be freely used under Attribution-ShareAlike license, unless stated otherwise. Cite this article:
Australasian figbird Facts for Kids. Kiddle Encyclopedia.