The spangled drongo (Dicrurus bracteatus) is a bird of the family Dicruridae. It is the only drongo to be found in Australia where it can be recognised by its black, iridescent plumage and by its characteristic forked tail. It feeds on insects and small vertebrates. It has complex and varied calls and is a mimic of the sounds it hears. It arrives in Queensland in late spring and breeds high in an isolated tree, producing three to five young each year.

Its basically black plumage is iridescent with blue and purple highlights. Its eyes are crimson. The most remarkable characteristic of its appearance is its tail, which is described by Morcombe as "long, outcurved and forked" and on first examination looks like its feathers are crossed over – like crossing your fingers. Young drongos lack the highlights and spots and their eyes are dark brown. 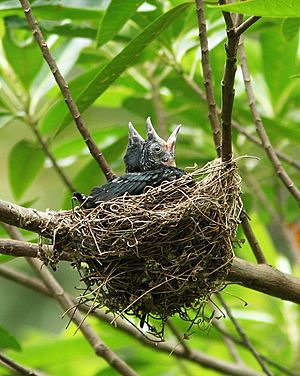 A nest of vine tendrils

The spangled drongo displays uninhibited and sometimes comical behaviour as it swoops and perches in search of insects, small birds and occasionally, small skinks. When it seasonally visits urban areas it is easily tamed by throwing small pieces of raw meat into the air, when it will accurately swoop and catch them mid-air.

Whilst this bird is often silent, it sometimes makes astonishingly loud, complex and entertaining calls that may sound like a "sneeze". The spangled drongo is an amazing mimic taking most of its vocabulary from the sounds heard in the vicinity and weaving them into a virtuoso aria.

The spangled drongo is the only drongo to be found in Australia. These birds are altitudinal and latitudinal migrants, and in the high altitude areas around Brisbane in Queensland, they arrive in late spring and leave with their new crop of juveniles in mid-summer. Nests are cup shaped in open spaces, where it is difficult for predators to access without being seen, 75% up the canopy. Each year, they produce 3–5 young.

The unsuccessful racehorse Drongo was named after the bird and led to the Australian slang insult "drongo" meaning "idiot".

All content from Kiddle encyclopedia articles (including the article images and facts) can be freely used under Attribution-ShareAlike license, unless stated otherwise. Cite this article:
Spangled drongo Facts for Kids. Kiddle Encyclopedia.