The cockatiel (Nymphicus hollandicus), also known as the quarrion and the weiro, is a bird that is a member of the cockatoo family endemic to Australia. They are prized as household pets and companion parrots throughout the world and are relatively easy to breed. As a caged bird, cockatiels are second in popularity only to the budgerigar.

Cockatiels are native to Australia, where they are found largely in arid or semi-arid country, but always close to water. Largely nomadic, the species will move to where food and water is available. They are typically seen in pairs or small flocks. Sometimes, hundreds will flock around a single body of water. To many farmers' dismay, they often eat cultivated crops.

They are the only cockatoo species which can sometimes reproduce in the end of their first year. 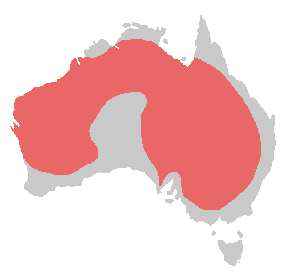 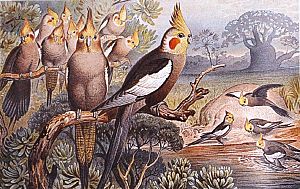 In contrast to most cockatoos, the cockatiel has long tail feathers roughly making up half of its total length. At 30 to 33 cm (12 to 13 in), the cockatiel is the smallest of the cockatoos which are generally larger at between 30 and 60 cm (12 and 24 in). 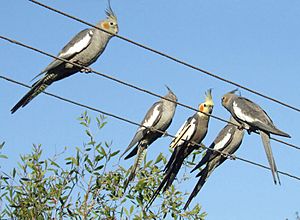 The "normal grey" or "wild-type" cockatiel's plumage is primarily grey with prominent white flashes on the outer edges of each wing. The face of the male is yellow or white, while the face of the female is primarily grey or light grey, and both sexes feature a round orange area on both ears, often referred to as "cheddar cheeks". This orange colouration is generally vibrant in adult males, and often quite muted in females. Visual sexing is often possible with this variant of the bird. 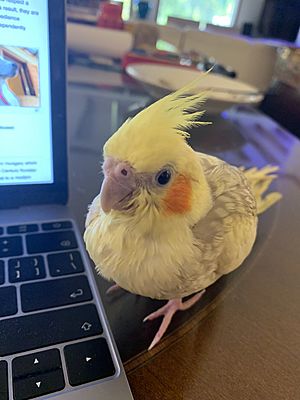 When they are babies they all have spots under their wings. At their first shedding/malt at 6 months of age the girls will keep their dots but the boys will lose theirs.

In addition to these different visible characteristics between males and females, the vocalisation of adult males is typically louder and more varied than that of females.

Cockatiels can be taught to sing specific melodies and speak many words and phrases. They have also learned to imitate certain human or environmental sounds without being taught how to do so. 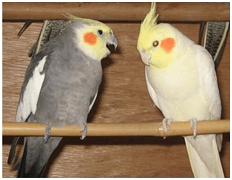 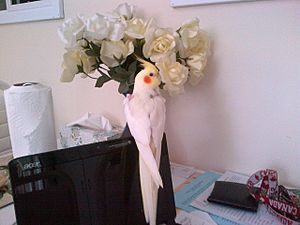 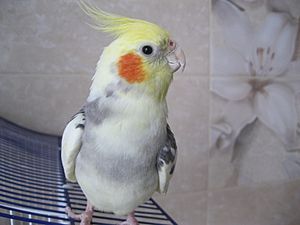 Worldwide there are currently 22 cockatiel colour mutations established in aviculture, of which eight are exclusive to Australia. Mutations in captivity have emerged in various colours, some quite different from those observed in nature. Wild cockatiels are grey with visible differences between males and females. Male grey cockatiels typically have yellow heads while the female has a grey head. Juveniles tend to look like females with pinker beaks. The pied mutation first appeared in California in 1949. This mutation is a blotch of colour on an otherwise solid-coloured bird. For example, this may appear as a grey blotch on a yellow cockatiel.

Lutino colouration was first seen in 1958. These birds lack the grey of their wild counterparts and are white to soft yellow. This is a popular colour; due to inbreeding, these cockatiels often have a small bald patch behind their crests. The cinnamon mutation, first seen in the 1950s, is very similar in appearance to the grey; however, these birds have a warmer, browner colouring. Pearling was first seen in 1967. This is seen as a feather of one colour with a different coloured edge, such as grey feathers with yellow tips. This distinctive pattern is on a bird's wings or back. The albino colour mutation is a lack of pigment. These birds are white with red eyes. Fallow cockatiels first appeared sometime in the 1970s. This mutation shows as a bird with cinnamon colouring with yellow sections. Other mutations include emerald/olive, dominant and recessive silver, and mutations exclusive to Australia: Australian fallow, faded (west coast silver), dilute/pastel silver (east coast silver), silver spangle (edged dilute), platinum, suffused (Australian olive), and pewter. Other mutations, such as face altering mutations, include whiteface, pastelface, dominant yellow cheek, sex-linked yellow cheek, gold cheek, creamface, and the Australian yellow cheek.

Cockatiel colour mutations can become even more complex as one bird can have multiple colour mutations. For example, a yellow lutino cockatiel may have pearling – white spots on its back and wings. This is a double mutation. An example of a quadruple mutation would be cinnamon cockatiel with yellowface colouring with pearling and pied markings. 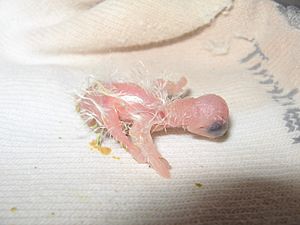 The cockatiel's lifespan in captivity is generally given as 16 to 25 years, though it is sometimes given as short as 10 to 15 years, and there are reports of cockatiels living as long as 32 years, the oldest confirmed specimen reported being 36 years old.

All content from Kiddle encyclopedia articles (including the article images and facts) can be freely used under Attribution-ShareAlike license, unless stated otherwise. Cite this article:
Cockatiel Facts for Kids. Kiddle Encyclopedia.