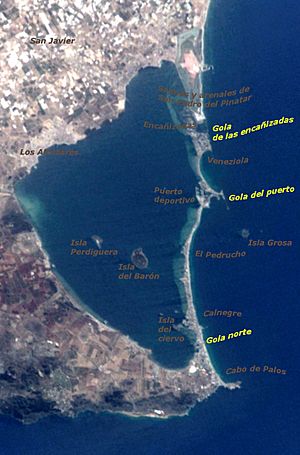 Mar Menor (Spanish pronunciation: [ˈmar meˈnor], "Minor sea") is a salty lagoon, in the southeast of the autonomous community of Murcia, in Spain. It separated from the Mediterranean sea by La Manga, a sandbar 22 kilometres (14 mi) in length and with a width ranging from 100 metres (330 ft) to 1,200 metres (3,900 ft).

It belongs to four municipalities: Cartagena, Los Alcázares, San Javier and San Pedro del Pinatar. It has a surface area of 135 square kilometres (52 sq mi). It has a perimeter of 59.51 square kilometres (22.98 sq mi). The warm and clear water is no more than 6 metres (20 ft) in depth. It was called "the largest swimming pool in the world", by famous swimmer and Hollywood actress Esther Williams.

The water has a high salt content which aids in flotation. It is one of the most popular places in Europe for a wide variety of water sports.

First the Phoenicians and then the Moorish kings, chose this "small sea" as the site of their summer residences. Today, this area attracts all those who seek a quiet place to rest and relax. There are ideal weather conditions all year round.

Ecological importance of the Mar Menor

At the northern end there are salt marshes which include a wetland of international importance. This area is conserved as a natural park run by the local government. Its Spanish name is "Salinas y Arenales de San Pedro del Pinatar". The microbes that live in this coastal lagoon have been recently described. In 1994 the Mar Menor was on the Ramsar Convention list for the conservation and sustainable use of wetlands. The Mar Menor is also part of a Specially Protected Area of Mediterranean Importance and is a Special Protection Area (ZEPA in Spanish) for bird life.

All content from Kiddle encyclopedia articles (including the article images and facts) can be freely used under Attribution-ShareAlike license, unless stated otherwise. Cite this article:
Mar Menor Facts for Kids. Kiddle Encyclopedia.