Kids Encyclopedia Facts
Not to be confused with the Roman politician Julius Caesar or William Shakespeare's play of the same name. 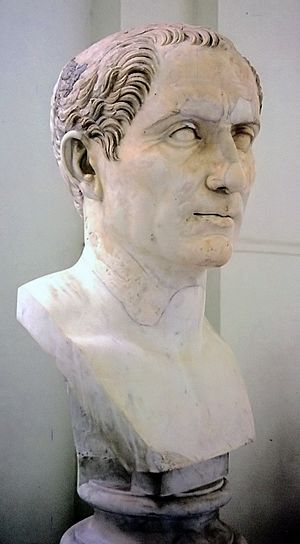 Caesar (English pl. Caesars; Latin pl. Caesares) is a title of imperial character. It derives from the name of Julius Caesar, the Roman dictator. The change from being a familial name to a title adopted by the Roman Emperors can be dated to about AD 68/69, the so-called "Year of the Four Emperors".

A statue of Claudius in the Vatican museum.

For political and personal reasons Octavian chose to emphasise his relationship with Caesar by styling himself simply "Imperator Caesar" (whereto the Roman Senate added the honorific Augustus, "Majestic" or "Venerable", in 26 BC), without any of the other elements of his full name. His successor as emperor, his stepson Tiberius, also bore the name as a matter of course; born Tiberius Claudius Nero, he was adopted by Caesar Augustus on June 26, 4, as "Tiberius Iulius Caesar". The precedent was set: the Emperor designated his successor by adopting him and giving him the name "Caesar".

The fourth Emperor, Claudius, was the first to assume the name "Caesar" upon accession, without having been adopted by the previous emperor; however, he was at least a member by blood of the Julio-Claudian dynasty, being the nephew of Tiberius and the uncle of Caligula. Claudius in turn adopted his stepson and grand-nephew Lucius Domitius Ahenobarbus, giving him the name "Caesar" in the traditional way; his stepson would rule as the Emperor Nero. The first emperor to assume the position and the name simultaneously without any real claim to either was the usurper Servius Sulpicius Galba, who took the imperial throne under the name "Servius Galba Imperator Caesar" following the death of the last of the Julio-Claudians, Nero, in 68. Galba helped solidify "Caesar" as the title of the designated heir by giving it to his own adopted heir, Lucius Calpurnius Piso Frugi Licinianus.

Galba's reign did not last long and he was soon deposed by Marcus Otho. Otho did not use the title "Caesar", but occasionally used the title "Nero" as emperor. Otho was then defeated by Aulus Vitellius who acceded with the name "Aulus Vitellius Germanicus Imperator Augustus." Vitellius did not at first adopt the cognomen "Caesar" as part of his name, and may have intended to replace it with "Germanicus" (he bestowed the name "Germanicus" upon his own son that year). 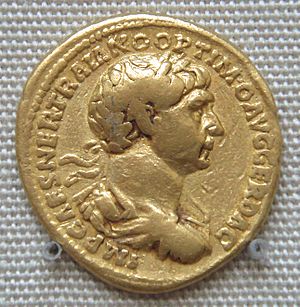 A coin of Trajan, found together with coins of the Kushan ruler Kanishka, at the Ahin Posh Buddhist Monastery, Afghanistan

By this point the status of "Caesar" had been regularised into that of a title given to the Emperor-designate (occasionally also with the honorific title Princeps Iuventutis, "Prince of Youth") and retained by him upon accession to the throne (e.g., Marcus Ulpius Traianus became Marcus Cocceius Nerva's designated heir as Caesar Nerva Traianus in October 97 and acceded on January 28, 98 as "Imperator Caesar Nerva Traianus Augustus"). After some variation among the earliest emperors, the style of the Emperor-designate on coins was usually Nobilissimus Caesar "Most Noble Caesar" (abbreviated to NOB CAES, N CAES etc.), though Caesar (CAES) on its own was also used.

The use of Caesar for the junior partner in a consortium imperii naturally occurred also in break-away 'empires', eager to copy the Rome-proper original; e.g. the last Gallic emperor, Tetricus I, granted the title to his son, Tetricus II.

On March 1, 293, Gaius Aurelius Valerius Diocletianus established the Tetrarchy, a system of rule by two senior Emperors and two junior sub-Emperors. The two coequal senior emperors were styled identically to previous Emperors, as Imperator Caesar NN. Pius Felix Invictus Augustus ("Elagabalus" had introduced the use of Pius Felix, "the Pious and Blessed", while Gaius Iulius Verus Maximinus "Thrax" introduced the use of Invictus, "the Unconquered"), and were called the Augusti, while the two junior sub-Emperors were styled identically to previous Emperors-designate, as NN. Nobilissimus Caesar. Likewise, the junior sub-Emperors retained the title "Caesar" upon accession to the senior position.

The Tetrarchy was quickly abandoned as a system (though the four quarters of the empire survived as praetorian prefectures) in favour of two equal, territorial emperors, and the previous system of Emperors and Emperors-designate was restored, both in the Latin-speaking West and the Greek-speaking East. 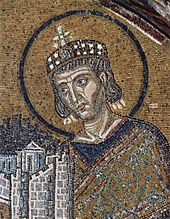 In the East (the so-called "Byzantine Empire"), the kaisar acquired a crown (without a cross) and was junior in rank to the Patriarch of Constantinople; as a result, this title was seen as a suitable one for a high prince of the blood, a Prince-regent or an Emperor-designate (Emperors-designate were usually crowned as co-Emperors during their predecessors' reigns).

The proliferation of individuals so titled prompted Aleksios I Komnenos to create the superior title Sebastokratôr (a portmanteau word meaning "Majestic ruler" derived from sebastos and Autokratôr, the Greek equivalents of Augustus and Imperator) for his brother Isaakios. Both "Kaisar" and "Sebastokratôr" were reduced in degree when Manuel I Komnenos introduced Despotes as a superior title; unlike the Caesar and the Sebastocrat, the Despot had a territorial jurisdiction, known as despotate, in addition to his degree of precedence. The continuing title cycle of proliferation causing devalutation continued to produce more artificial titles. 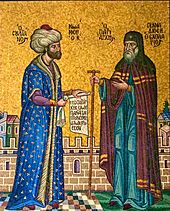 Following his conquest of Constantinople in 1453, the victorious Ottoman sultan Mehmed II was the first of the rulers of the Ottoman Empire to assume the title "Caesar of the Roman Empire" (Ottoman Turkish Kayser-i-Rûm). Here, the Caesar title should not be understood as the minor title it had become, but as the glorious title of the emperors of the past, a connotation that had been preserved in Persian and Arabic. The adoption of the title also implied that the Ottoman state considered itself the continuation, by absorption, of the Roman Empire, a view not shared in the West. Acting in his capacity as Caesar of the Roman Empire, Mehmed reinstated the defunct Ecumenical Patriarchate of Constantinople.

All content from Kiddle encyclopedia articles (including the article images and facts) can be freely used under Attribution-ShareAlike license, unless stated otherwise. Cite this article:
Caesar (title) Facts for Kids. Kiddle Encyclopedia.