A Japanese plane in use

A plane is a tool for shaping wood. Planes are used to flatten, reduce the thickness of, and impart a smooth surface to a rough piece of lumber. As the name implies, the tool turns the worked surface into a smooth plane, a level, even surface.

Hand planes are generally the combination of a cutting edge, such as a sharpened metal plate, attached to a firm body, that when moved over a wood surface, take up relatively uniform shavings, by nature of the body riding on the 'high spots' in the wood, and also by providing a relatively constant angle to the cutting edge, render the planed surface very smooth.

Hand planes are ancient, originating thousands of years ago. Early planes were made from wood and blades first from bronze and later from iron and even later from steel. The cutting blade or iron was held in place with a wooden wedge.

Parts of a Plane 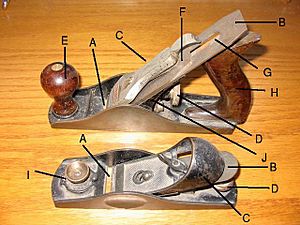 Parts of a plane

Two styles of plane are shown with some parts labeled. The top of the image is a bench plane; the bottom is a block plane.

Planes may also be classified by the material of which they are constructed:

Some special types of planes include:

All content from Kiddle encyclopedia articles (including the article images and facts) can be freely used under Attribution-ShareAlike license, unless stated otherwise. Cite this article:
Plane (tool) Facts for Kids. Kiddle Encyclopedia.