Endogenous and exogenous facts for kids

Volcanoes are an endogenous process. 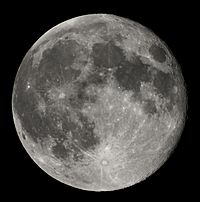 The Moon causes tides, which are periodic rises and falls, in the Earth's oceans and other big bodies of water.

There are three main endogenous processes: folding, faulting and volcanism. They take place mainly along the plate boundaries, which are the zones that lay on the edges of plates. These zones are weak. Endogenous processes cause many major landform features.

Many exogenous (extra-terrestrial) forces are as a result of other bodies in space. For example, the Moon causes tides in the Earth's oceans and other big bodies of water. Impacts from comets and meteoroids change the surface of the Earth. When they strike the Earth, they create craters which are holes, which can be very big or small, in the ground. Radiation from the Sun can cause aurorae, which are lights that can be seen at night near the poles.

All content from Kiddle encyclopedia articles (including the article images and facts) can be freely used under Attribution-ShareAlike license, unless stated otherwise. Cite this article:
Endogenous and exogenous Facts for Kids. Kiddle Encyclopedia.