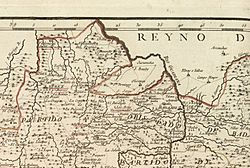 Part of an 18th-century Spanish map, showing Olivenza as part of Portugal

Olivença (Spanish: Olivenza) is a territory disputed by Portugal and Spain. The territory was under Portuguese rule between 1297 (Treaty of Alcañices) and 1801. Then, it was occupied and ruled by Spain. After the Napoleonic Wars, Spain promised to give Olivença back to Portugal, which it still hasn't done to this day.

Olivença/Olivenza territory is 750 Km2 in area.

Besides the town, the territory of Olivença/Olivenza includes seven villages:

All content from Kiddle encyclopedia articles (including the article images and facts) can be freely used under Attribution-ShareAlike license, unless stated otherwise. Cite this article:
Olivenza Facts for Kids. Kiddle Encyclopedia.