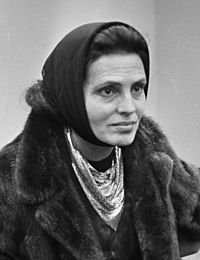 Amália da Piedade Rebordão Rodrigues, known just by Amália Rodrigues (July 23, 1920 – October 6, 1999) was a Portuguese singer and actress. She was called the "Rainha do Fado" ("Queen of Fado") and she was very important in making the fado popular all over the world. Her younger sister, Celeste, was also a popular singer. She was born in Lisbon.

All content from Kiddle encyclopedia articles (including the article images and facts) can be freely used under Attribution-ShareAlike license, unless stated otherwise. Cite this article:
Amália Rodrigues Facts for Kids. Kiddle Encyclopedia.