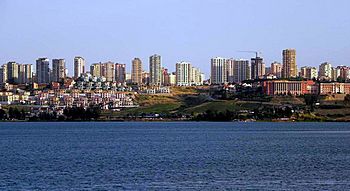 Adana (Greek Άδανα) (the ancient Antioch in Cilicia or Antioch on the Sarus) is the capital of Adana Province in Turkey. According to the 2000 census, with 1,130,710 inhabitants, it is the fifth most populous city of Turkey (after İstanbul, Ankara, İzmir and Bursa). The 2006 estimate of Adana's population is 1,271,894.

For most Turkish people, the word 'Adana' associates with Kebab, şalgam, cotton, oranges and very hot weather, in the awareness that Adana also embodies more than just these.

Adana is also named among the 25 European Regions of the Future for 2006/2007 by Foreign Direct Investment Magazine. Chosen alongside Kocaeli for Turkey, Adana scored the most points for cost effectiveness against Kocaeli's points for infrastructure development, while Adana and Kocaeli tied on points for the categories of human resources and quality of life.

Adana has a hot-summer Mediterranean climate (Csa in the Koeppen climate classification).

All content from Kiddle encyclopedia articles (including the article images and facts) can be freely used under Attribution-ShareAlike license, unless stated otherwise. Cite this article:
Adana Facts for Kids. Kiddle Encyclopedia.