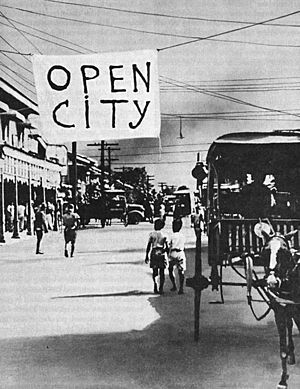 Manila was declared an open city in December 1941 to avoid its destruction as Imperial Japan invaded the Commonwealth of the Philippines.

In war, when enemy forces are close to capturing a city, the government or military forces in control of the city will sometimes call the city an open city. This means that they will not try to defend the city. The attacking armies will be expected to not to bomb or attack the city. This approach aims to prevent historic landmarks from being destroyed and civilians from being killed.

An open city is not defended and not fortified. It is open to occupation by opposing forces with no resistance by the defenders. Under International law an open city may not be bombed or subject to artillery attack.

Attacking forces do not always respect cities that call themselves an "open city." Defensive forces may use it as a political tactic as well. In some cases, the declaration of a city to be "open" is made by a side which is close to defeat. In other cases, the city could be defended but the defenders do not want the city to be destroyed.

All content from Kiddle encyclopedia articles (including the article images and facts) can be freely used under Attribution-ShareAlike license, unless stated otherwise. Cite this article:
Open city Facts for Kids. Kiddle Encyclopedia.