The Condé Nast Building, officially Four Times Square, is a modern skyscraper in Times Square in Midtown Manhattan. Located on Broadway between 42nd Street and 43rd, the structure was finished in January 2000. The building stretches 48 stories to 809 ft (247 m) making it the 10th tallest building in New York City and the 38th tallest in the United States. The major office space tenants are magazine publishing company Condé Nast Publications and the law firm of Skadden, Arps, Slate, Meagher & Flom LLP. Major retail tenants include ESPN Zone and Duane Reade.

Four Times Square is owned by The Durst Organization. The architects were Fox & Fowle. The building contains 1.6 million square feet (150,000 m²) of floor space. In 1995, Four Times Square was the first speculative office building to be developed in New York City in almost a decade, but it was fully leased and occupied almost immediately after completion. 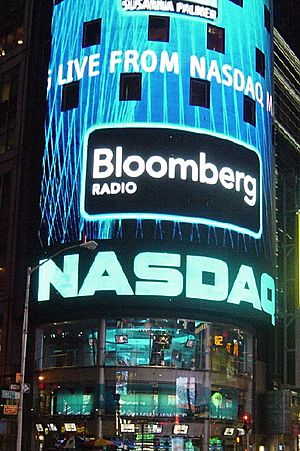 NASDAQ's MarketSite is located at the northwest corner of the building. It is a seven-story cylindrical tower with a high-tech electronic display, providing market quotes, financial news and advertisements. The ground floor of the MarketSite contains a television studio with a wall of monitors and an arc of windows looking out onto Times Square.

During 2002 and 2003, the existing radio antenna, built for Clear Channel Communications as a backup transmitter site for its four FM stations, was removed and replaced with a 300-foot (91 m) mast to support television and radio broadcasters who were displaced by the destruction of the World Trade Center. Including the antenna, its height would be 1,143 ft (348 m), making it the second tallest structure in the New York City, behind the Empire State Building.

Four Times Square is one of the most important examples of green design in skyscrapers in the United States. Environmentally friendly gas-fired absorption chillers, along with a high-performing insulating and shading curtain wall, ensure that the building does not need to be heated or cooled for the majority of the year.

Office furniture is made with biodegradable and non-toxic materials. The air-delivery system provides 50% more fresh air than is required by New York City Building Code, [2] and a number of recycling chutes serve the entire building. Being the first project of its size to undertake these features in construction, the building has received an award from the American Institute of Architects, as well as AIA New York State.

All content from Kiddle encyclopedia articles (including the article images and facts) can be freely used under Attribution-ShareAlike license, unless stated otherwise. Cite this article:
Condé Nast Building Facts for Kids. Kiddle Encyclopedia.