Basilica of Superga facts for kids 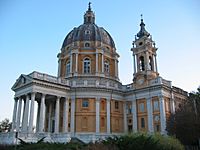 The Royal Basilica of Superga is a large church on the outskirts of the Italian city of Turin. The site was originally bare until King Victor Amadeus II of Sardinia decided to create a cathedral there. He wanted a burial place for members of his dynasty, the House of Savoy. Construction lasted from 1717 to 1731. The building was designed by the Italian architect Filippo Juvarra. The building is often compared to the larger and more famous St. Peter's Basilica. Most of the Kings of Sardinia are buried there.

All content from Kiddle encyclopedia articles (including the article images and facts) can be freely used under Attribution-ShareAlike license, unless stated otherwise. Cite this article:
Basilica of Superga Facts for Kids. Kiddle Encyclopedia.